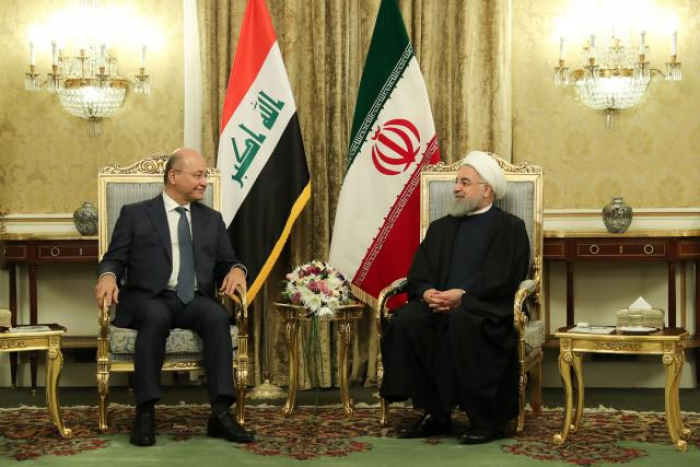 Iran and Iraq could raise their annual bilateral trade to $20 billion from the current $12 billion, President Hassan Rouhani said on Saturday, despite concerns over the impact of renewed U.S. sanctions.

“... through bilateral efforts, we can raise this figure (for bilateral trade) to $20 billion in the near future,” Rouhani said in comments broadcast live on state television.

“We held talks on trade in electricity, gas, petroleum products and activities ... in the field of oil exploration and extraction,” Rouhani said.

Baghdad is seeking U.S. approval to allow it to import Iranian gas for its power stations. Iraqi officials say they need more time to find an alternative source than a 45-day waiver granted to it by the United States.

“It will be important to create free trade zones at our shared border and to connect the two countries’ railways,” Salih said.

“We will not forget your support for the Iraqi people in the fight against (Iraqi dictator) Saddam (Hussein). Neither do we forget Iran’s stand in the recent fight against terrorism,” added Salih, an Iraqi Kurd.

“The only way to counter plots (by Iraq’s enemies) is by strengthening the unity of all Iraqi groups, including Kurds, Arabs, Shi’ite and Sunnis,” Ayatollah Khamenei said, according to his website.

“Some governments in the region and outside of it hold a deep grudge against Islam ... and Iraq, and interfere in Iraq’s internal affairs and they must be strongly resisted,” he said.

Iran accuses the United States and its regional rival Saudi Arabia of exploiting divisions among Shi’ite and Sunni Muslims. Washington and Riyadh denounce Iran as fuelling conflicts in countries including Lebanon, Syria and Yemen.

“We seek to boost cooperation (with Iran) at all levels ... in order to serve the interests of both countries,” the website quoted Salih as saying.

Iran wields wide influence in Iraq, its smaller neighbor, where its Revolutionary Guards played a key role in training and arming the mainly Shi’ite militias that helped defeat Islamic State.

Iraq imports a wide range of goods from Iran, including food, agricultural products, home appliances, air conditioners and car parts. Iranian goods imports to Iraq were worth about $6 billion in the year ending March 2018, or about 15 percent of Iraq’s total imports for 2017.

Iraqi officials told Reuters last week that Iraq had agreed to sell foodstuffs in return for Iranian gas and energy supplies. Iranian trade officials denied that any food-for-gas scheme could be set up as Iran was a net exporter of food to Iraq.

“We have exported more than $6 billion to Iraq in the past seven months and we could import goods for that amount but not food items,” Yahya Al-e Eshaq, head of the Iran-Iraq chamber of commerce, was quoted as saying by the ILNA news agency.

A spokesman for an association of Iranian gas and petrochemicals exporters said Iraq wanted to pay for the gas imports in its dinar currency, the semi-official ISNA news agency reported.