What’s inside the Great Pyramid? - iWONDER 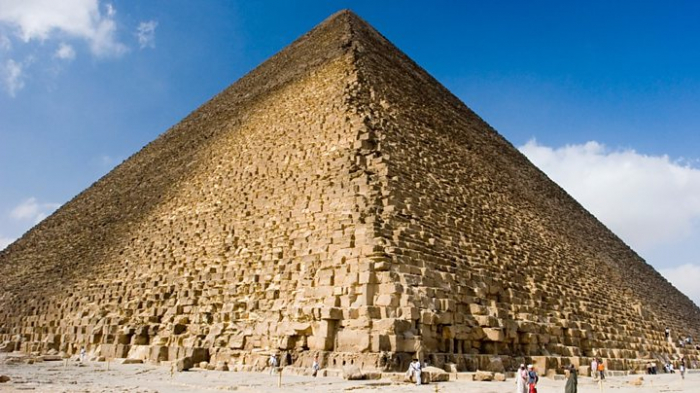 According to Napoleonic legend, the future emperor of France emerged from Egypt’s Great Pyramid pale and shaken, having spent hours alone in the King’s Chamber. He never revealed what had rattled him, but supposedly the episode changed his life.

Whether or not the story is true, it certainly attests to the power of the Great Pyramid to rouse a great leader’s imagination as well as our own: What could Napoleon possibly have seen to provoke such a reaction? What exactly is inside the Great Pyramid? The plain answer is, well, not a lot, really.

The Great Pyramid, or the Pyramid of Khufu, is the oldest and the tallest of the three pyramids towering over Giza. Constructed c. 2551–2528 BCE, it originally stood at 481.4 feet (147 meters), or about 45 stories. Its immense size makes it a marvel to behold, but the Great Pyramid, and its neighbors, the Pyramids of Khafre and Menkaure, are mostly just solid masses of stone—2.3 million blocks of cut limestone, to be more precise, which is the approximate number making up the Great Pyramid. All three pyramids would originally have had an outer casing of lighter limestone, as seen on the cap of Khafre’s pyramid. We can only imagine how the gleaming white limestone would have made the pyramids an even more dazzling spectacle than they are now.

The Pyramids of Giza, like the Egyptian pyramids that came before and after them, were royal tombs, a final resting place for their pharaohs, or kings. They were often part of an extensive funerary complex that included queens’ burial sites and mortuary temples for daily offerings. The pharaoh’s final resting place was usually within a subterranean burial chamber underneath the pyramid. Although the Great Pyramid has subterranean chambers, they were never completed, and Khufu’s sarcophagus rests in the King’s Chamber, where Napoleon is said to have sojourned, deep inside the Great Pyramid.

Like its neighbors, the Great Pyramid has very little open space inside its hulking mass. Napoleon would have reached the King’s Chamber through a very tight ascending passageway, past the Queen’s Chamber (a misnomer), and then through a taller corbelled passageway called the Grand Gallery. Once inside the King’s Chamber, Napoleon would have seen that it was small and lined, like other kings’ chambers, with thick granite blocks. The space would have been very austere, as Egyptians only began decorating burial chambers with hieroglyphic texts in later pyramids. Moreover, by the time of Napoleon’s Egyptian Campaign at the end of the 18th century, the pyramids would have long been plundered. He would not have found any rumored treasures in the chamber, only the enormous granite sarcophagus, once containing the king’s mummy, set firmly in the floor.

With not much to see inside the Great Pyramid, or either of the other pyramids near Giza, we can only imagine what could have disconcerted the proud Napoleon—just as we can only imagine the pyramids’ other mysteries: the royal treasures they once might have hidden, the brilliant sight they must have been when first completed, and the disciplined effort it took to construct them.