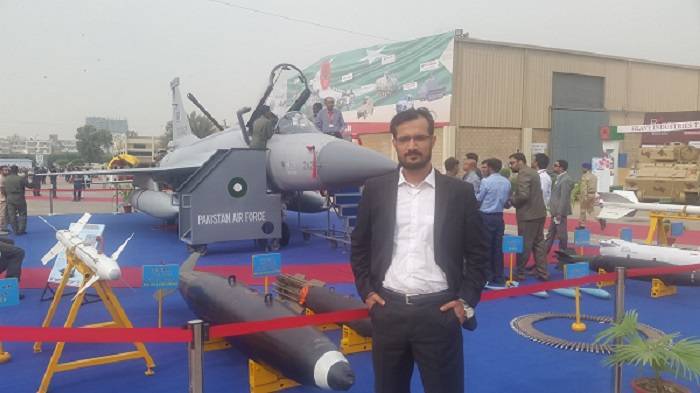 How do you assess the current level of military-technical cooperation between Azerbaijan and Pakistan?

Pakistan was among the first states to recognize Azerbaijan’s independence following the 1991 Soviet collapse.

The two countries signed a defence agreement in May of 2003, which allows Azerbaijani military staff, in particular special force units to take part in annual military drills along with the Pakistani Armed Forces. As a part of the agreement, Azerbaijani naval personnel participated in a biggest Pakistani-led multinational exercise, AMAN-2013, held in March in the Arabian Sea. In addition to this, Pakistan and Azerbaijan will hold mutual military exercises. 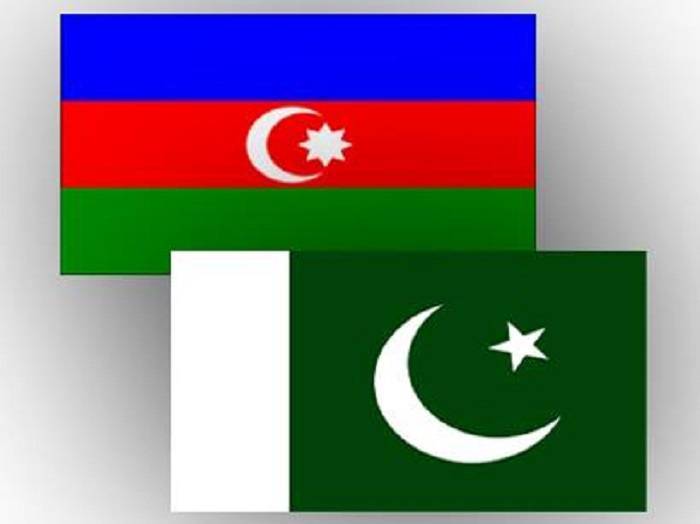 Moreover, military and defence cooperation between Azerbaijan-Pakistan is signified by continuous dialogue in the form of high-level meetings, and military agreements such as the military cooperation agreement that was signed in February of 2014 in Islamabad. The same updated document was signed on April 1, 2015, during the Working Group meeting in Baku. Azerbaijan, which suffers from the long-term bloody conflict with Armenia for more than a decade, considers the further development of defence industry as a one of the main priorities. 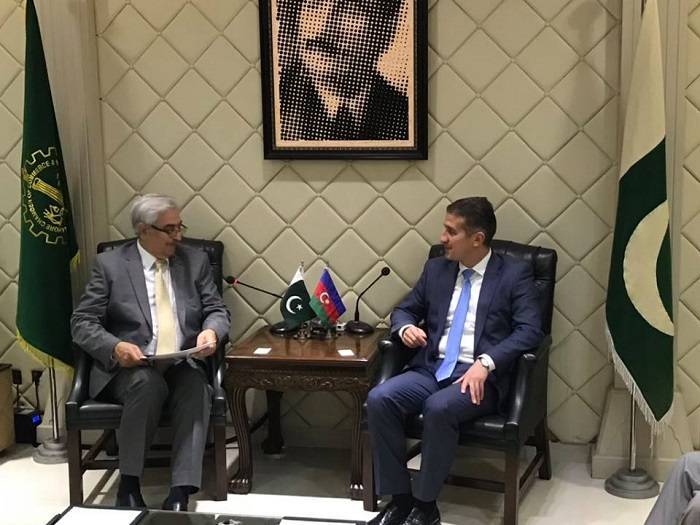 The relations of strategic cooperation between Azerbaijan and Pakistan contribute to interaction in all spheres. Ambassador of Azerbaijan to Pakistan Ali Alizada earlier said that there had been a 23% increase in trade between both countries.

In accordance with the protocol of the meeting of the Pakistan-Azerbaijan working group, a delegation of the Armed Forces of the Islamic Republic of Pakistan visited capital Baku on October 2, 2018 to take part in the exchange of experience on Psychological Training and Public Relations.

The parties discussed the current state of the military cooperation and held an exchange of views on the work done by the armies of the two countries in the sphere moral psychological training and public relations.

In last week of October 2018, Azerbaijan’s Chief of State Border Service Colonel General Elchin Guliyev arrived in Pakistan on an official visit. During his visit, he met with civilian and military leadership. These mutual top level visits started the new era of relationship and coordination between two countries. 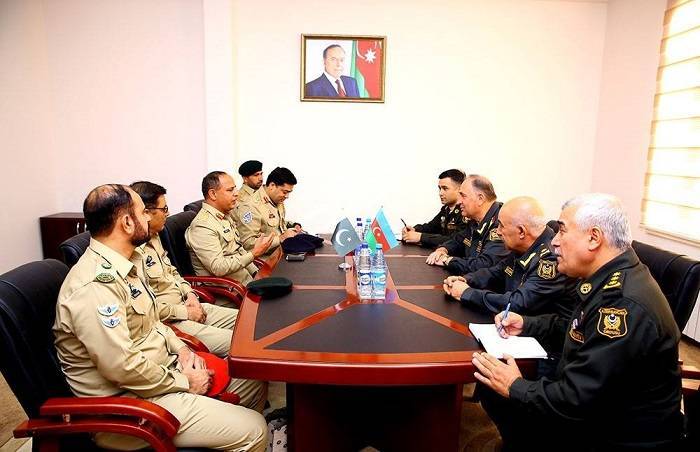 Azerbaijan has already acquired Super Mushak aircraft from Pakistan. The negotiations on the acquisition of JF-17 Thunder fighter jets from Pakistan are nearing completion. What other types of weapons and military equipment produced in Pakistan may be of interest to Azerbaijan? 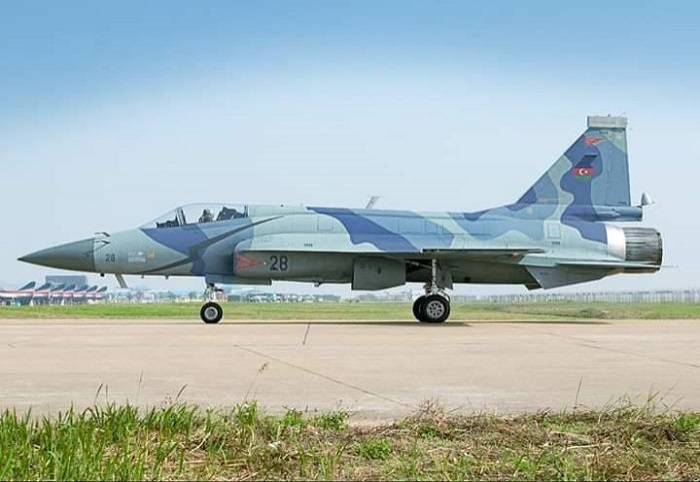 JF-17 Thunder Block II will replace obsolete old fleet of Mig-21 in the Azerbaijani army’s arsenal and will be most advance fighter aircraft in its entire air force providing it advance air to air, air to surface and air to sea strike and recon capabilities. Azerbaijan Thunders will likely house Turkish subsystems.

The JF-17 aircraft had been produced as an affordable and modern replacement to French-made Mirage III and F-7 interceptors. Pakistan had long been trying to find countries to buy the JF-17 in order to reduce the per-unit cost the Pakistan Air Force pays. Thirteen countries have so far expressed interest in purchasing the JF-17 aircraft are Azerbaijan, Zimbabwe, Bangladesh, Myanmar, Egypt, Iran, Lebanon, Malaysia, Morocco, Nigeria, Sri Lanka, Algeria and Sudan.

While Azerbaijani defence industry was likely established in 2005, it has shown significant development. The country manufactures well-known Istiglal sniper rifle, which is also in the basket of Pakistani Special Forces “SSG” since 2012 and widely used against terrorists in operations. 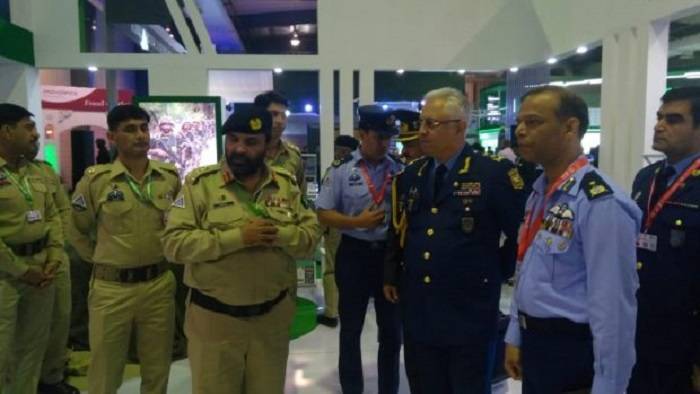 Pakistan has always supported Azerbaijan’s position on resolution of the Nagorno-Karabakh conflict. And what does the Pakistani public know about the aggression of Armenia against Azerbaijan?

Chairman of the Joint Chiefs of Staff Committee of Pakistan’s Armed Forces, Army General Zubair Mahmood stated on November 16, 2017 that Pakistan will continue to support Azerbaijan in the issue of the Armenia-Azerbaijan Nagorno-Karabakh conflict.

Azerbaijan is one of the four member countries of OIC contact group on Kashmir and another one is Turkey among 57 Muslim states. Azerbaijan and Turkey are the open supporters of Pakistan on Kashmir and every year restate their position in highest level. This ongoing strong cooperation can be seen in all fields, especially on the development of our military ties.

Pakistan and Azerbaijan partnership and bilateral relations are growing rapidly. Recently, there was an exchange of high-level delegations between the two countries. Senate Chairman Mohammad Sadiq Sanjrani participated in the celebrations of establishment of a democratic parliamentary republic in Azerbaijan. He greeted President Ilham Aliyev on the 100th anniversary of the Azerbaijani Parliament. On November 26, 2018, an Azerbaijani delegation led by Deputy Minister of Defense - Commander of the Air Force, Lieutenant General Ramiz Tairov visited the Islamic Republic of Pakistan to attend the 10th International Defense Exhibition and Seminar IDEAS-2018 held in Karachi from 27 to 30 November.

Do you think it is possible to create a joint Azerbaijan-Turkey-Pakistan military-political bloc?

I think yes. Moreover, the first step towards this was taken on December 20, 2017 in Baku at the 5th meeting of the foreign ministers of Iran, Pakistan, Azerbaijan and Turkey. All these countries support a peaceful solution to the Kashmir and Karabakh problems, and the Syrian conflict in accordance with UN resolutions. In my opinion, such a union is possible, given the fact that Azerbaijan, Pakistan and Turkey are on the same side on all international issues.