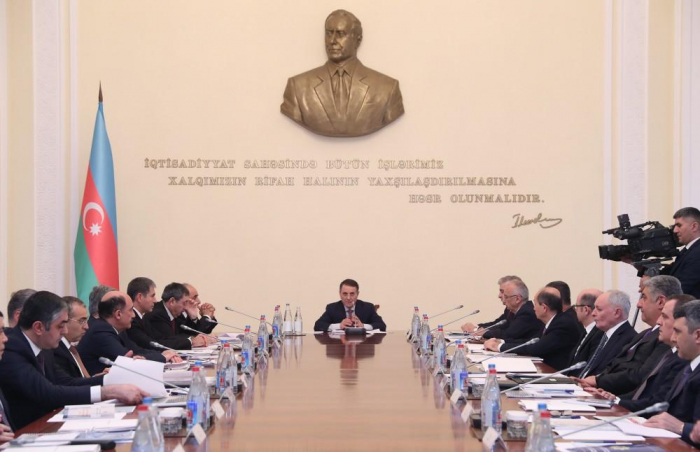 Discussions on Azerbaijan’s Cybersecurity Strategy for 2019-2024 and the Report on the Status of Application of International Financial Reporting Standards in the Structures of Public Importance were put on the agenda of the meeting.

Mammadov said that the growth of cybercrime poses a big threat in the modern world, and according to a UN report, every year over 1.5 million people become victims of crimes committed through the internet.

This circumstance makes it necessary to improve the cybersecurity systems in state administration, banking and transport, national security system and other areas, expansion of other measures against cybercrime.

Then, reports of Azerbaijani Minister of Transport, Communications and High Technologies Ramin Guluzade and Minister of Finance Samir Sharifov on the issues put on the agenda were heard.

Azerbaijani Defense Minister Zakir Hasanov, Chairman of the Central Bank of Azerbaijan Elman Rustamov, Head of the State Security Service Madat Guliyev, Acting Chairman of the Board of the Financial Market Supervisory Authority of Azerbaijan (FIMSA) Ibrahim Alishov and others discussed both issues.

After views were exchanged, a decision was made that the agreed Cybersecurity Strategy for 2019-2024, taking into account Guluzade’s report, be submitted for the president’s approval.

As for the second issue, taking into account Sharifov’s report, a decision was made to prepare a draft order of the Cabinet of Ministers, reflecting important instructions on the issues arising from the joint report of the Finance Ministry and FIMSA, with corresponding structures.

In conclusion of the meeting, Mammadov gave instructions to the heads of the corresponding structures.