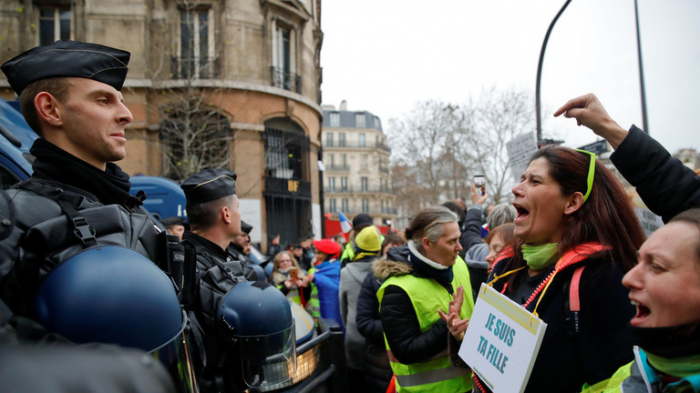 As France still battles with defiant Yellow Vests protests, its prime minister has warned that the violent unrest is an indication of anger felt by “neglected” people all over Europe and called for the EU values to be defended.

The “strong anger” that fuels the Yellow Vests demonstrations, which have regularly gripped France since mid-November 2018, is hardly an “exclusively French matter,” Philippe said while speaking in the German city of Cologne. The anger is “partly a response to the global financial crisis,” which Europe faced back in 2008, and now people are facing “worse prospects” in life as the living standards have either stayed the same or have even been on the decrease over the last ten years since the crisis.

People in France demand spending capacity be improved and their voices heard but it is true for other nations as well, Philippe said.

“There are parts of society that feel they are not being heard or seen or even represented anymore. These are people that feel they were left behind. And we need to face that."

Philippe then called on the European governments to take responsibility for the recent developments and hear their people. However, less than a week ago, he announced that his government would crack down on unauthorized protests and toughen punishment for people rioting or taking part in unauthorized protests. The newly announced moves immediately received sharp criticism from the opposition.

In light of the forthcoming European elections, which are scheduled to be held in May, Philippe called on the European politicians to make efforts to maintain the status quo and prevent the European Parliament from being hijacked by either right-wing or left-wing populists.

“This is not just about an election… this is about … an alliance, which has to be formed to defend Europe” and the values it has been built upon, Philippe said, suggesting that the European politicians “ask [themselves] whether [they] will be able to bring the citizens and the states together to face these challenges.”

Philippe’s ideas were readily welcomed by the German officials. Paris and Berlin should once again spearhead an effort to protect “the House Europe” from “crumbling,” the head of the German state of North Rhine-Westphalia, Armin Laschet, said, adding that “this is the European project we will not let [anyone] break.”

His words came just days after Italy’s Euroskeptic Deputy Prime Minister Matteo Salvini suggested ending the long-standing French and German domination on the continent in what he described as a “European Spring” while particularly calling on Poland to join forces with Italy in this endeavor.

While the French Prime Minister is seemingly more concerned with saving Europe, the furious protests in France itself show no signs of abating. Most recently, the protesters threatened to trigger a bank run with a nationwide coordinated cash withdrawal.

The move was mulled after Philippe announced his crackdown on “unauthorized protests”. The government also urged the protesters to take part in a national debate scheduled for next week instead of demonstrating on the streets.