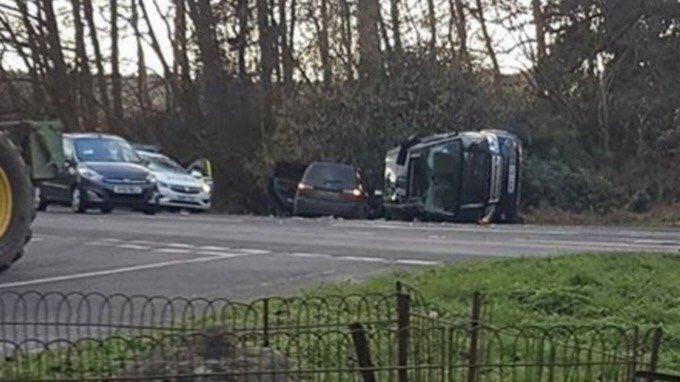 Prince Philip, duke of Edinburgh, was involved in a car accident Thursday in Norfolk, England. The 97-year-old royal walked away from the overturned SUV unscathed, AzVision.az reports citing Sputnik.

Phillip, consort to the queen, was involved in a crash Thursday afternoon on the A149 near West Newton, Norfolk, not far from the Sandringham Estate where he and Queen Elizabeth II have been staying since the holidays. Though he was behind the wheel of the SUV as it flipped over, he emerged from the incident shaken but unhurt.

​A spokesperson for Norfolk Police confirmed they received the call around 3 p.m. and that police and ambulance crews attended to two people in one of the vehicles who suffered minor injuries. However, a Buckingham Palace spokesperson confirmed Philip "saw a doctor as a precaution, and the doctor confirmed he was not injured."

A witness to the crash told the BBC the prince consort looked "visibly shaken" as he was helped from the car.

A local man told the Mirror the crash "looked really nasty. The whole front of it was smashed up, and there were people there being questioned by police."

The 97-year-old royal, who has been married to Elizabeth since 1947, retired from public life and his royal duties in August 2017. Metro noted that Philip has been spotted behind the wheel of his SUV many times before.