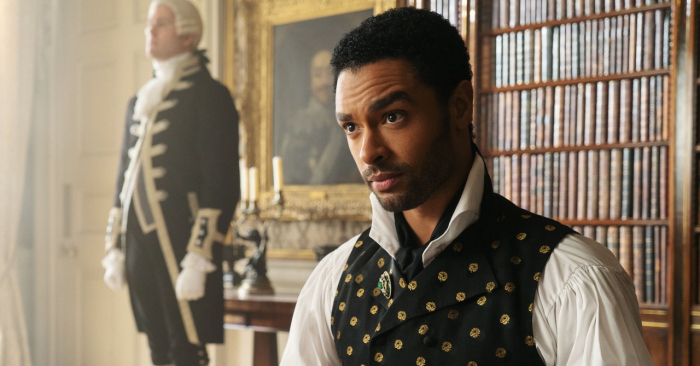 Whitewashed stories about the British upper classes are being retold. Fedora Abu explores the Bridgerton effect, and talks to Lawrence Scott, author of Dangerous Freedom.

For centuries, the Royal Family, Britain's wealthiest, most exclusive institution, has been synonymous with whiteness. And yet, for a brief moment, there she was: Her Royal Highness the Duchess of Sussex, a biracial black woman, on the balcony at Buckingham Palace. Her picture-perfect wedding to Prince Harry in 2018 was an extraordinary amalgamation of black culture and centuries-old royal traditions, as an African-American preacher and a gospel choir graced St George's Chapel in Windsor. Watching on that sunny May afternoon, who would've known things would unravel the way they have three years on?

Although heralded as a history-maker, the Duchess of Sussex is not actually the first woman of colour to have been part of the British upper classes. Dangerous Freedom, the latest novel by Trinidadian author Lawrence Scott, tells the story of the real historical figure Elizabeth Dido Belle, the mixed-race daughter of enslaved woman Maria Belle and Captain Sir John Lindsay. Born in 1761, she was taken in by her great-uncle, Lord Chief Justice William Murray, first Earl of Mansfield, and raised amid the lavish setting of Kenwood House in Hampstead, London, alongside her cousin Elizabeth. It was a rare arrangement, most likely unique, and today she is considered to be Britain's first black aristocrat.

Scott's exploration of Belle's story began with a portrait. Painted by Scottish artist David Martin, the only known image of Belle shows her in a silk dress, pearls and turban, next to her cousin, in the grounds of Kenwood. It's one of the few records of Belle's life, along with a handful of written accounts: a mention in her father's obituary in the London Chronicle describing her "amiable disposition and accomplishments"; a recollection by Thomas Hutchinson, a guest of Mansfield, of her joining the family after dinner, and her uncle's fondness for her. These small nuggets – together with years of wider research – allowed Scott to gradually piece together a narrative.

As it happened, while Scott was delving into the life of Dido Belle, so were the makers of Belle, the 2014 film starring Gugu Mbatha-Raw was many people's first introduction to the forgotten figure. With those same fragments, director Amma Asante and screenwriter Misan Sagay spun a tale that followed two classic Hollywood plotlines: a love story, as Dido seeks to find a husband, but also a moral one as we await Mansfield's ruling on a landmark slavery case. As might be expected, Belle is subjected to racist comments by peers and, in line with Hutchinson's account, does not dine with her family – nor have a "coming out". However, she is shown to have a warm relationship with her cousin "Bette" and her "Papa" Lord Mansfield, and a romantic interest in John Davinier, an anglicised version of his actual name D'Aviniere, who in the film is depicted as a white abolitionist clergyman and aspiring lawyer.

Two drafts into his novel when Belle came out, Scott was worried that the stories were too similar – but it turned out that wasn't the case. Dangerous Freedom follows Belle's life post-Kenwood – now known as Elizabeth D'Aviniere and married and with three sons, as she reflects on a childhood tinged with trauma, and yearns to know more about her mother. Her husband is not an aspiring lawyer but a steward, and cousin "Beth" is more snobbish than sisterly. Even the painting that inspired the novel is reframed: where many see Dido presented as an equal to her cousin, Scott's Dido is "appalled" and "furious", unable to recognise the "turbaned, bejewelled… tawny woman".

For Scott, the portrait itself is a romantic depiction of Belle that he aims to re-examine with his book – the painting's motifs have not always been fully explored in whitewashed art history, and he has his own interpretation. "The Dido in the portrait is a very romanticised, exoticised, sexualised sort of image," he says. "She has a lot of the tell-tale relics of 18th-Century portraitures, such as the bowl of fruit and flowers, which all these enslaved young boys and girls are carrying in other portraits. She's carrying it differently, it's a different kind of take, but I really wonder what [the artist] Martin was trying to do." The film also hints at the likely sexualisation of Belle when in one scene a prospective suitor describes her as a "rare and exotic flower". "One does not make a wife of the rare and exotic," retorts his brother. "One samples it on the cotton fields."

In fact, to find a black woman who married into the aristocracy, we have to fast forward another 250 years, when Emma McQuiston, the daughter of a black Nigerian father and white British mother, wedded Ceawlin Thynn, then Viscount Weymouth in 2013. In many ways, the experiences of Thynn (now the Marchioness of Bath) echo those of Dido: in interviews, she has addressed the racism and snobbery she first experienced in aristocratic circles, and her husband has shared that his mother expressed worries about "400 years of the bloodline".

Ironically, there has long been speculation that the Royal Family could itself have mixed-race ancestry. For decades, historians have debated whether Queen Charlotte, wife of King George III, had African heritage but was "white-passing" – as is alluded to in Dangerous Freedom. While many academics have cast doubt on the theory, it's one that the writers of TV drama series Bridgerton run with, casting her as an unambiguously black woman. The show imagines a diverse "ton" (an abbreviation of the French phrase le bon ton, meaning sophisticated society), with other black characters including the fictional Duke of Hastings, who is society's most eligible bachelor, and his confidante Lady Danbury. Viewed within the context of period dramas, which typically exclude people of colour for the sake of historical accuracy, Bridgerton's ethnically diverse take on the aristocracy is initially refreshing. However, that feeling is complicated somewhat by the revelation that the Bridgerton universe is not exactly "colourblind", but rather what is being depicted in the series is an imagined scenario where the marriage of Queen Charlotte to King George has ushered in a sort of post-racial utopia.

With all those palaces, jewels and paintings, it's not hard to see why contemporary culture tends to romanticise black figures within the British upper classes
Light-hearted, frothy and filled with deliberate anachronisms, Bridgerton is not designed to stand up to rigorous analysis. Even so, the show's handling of race has drawn criticism for being more revisionist than radical. The series is set in 1813, 20 years before slavery was fully abolished in Britain, and while the frocks, palaces and parties of Regency London all make for sumptuous viewing, a key source of all that wealth has been glossed over. What's more, just as Harry and Meghan's union made no material difference to ordinary black Britons, the suggestion that King George's marriage to a black Queen Charlotte wiped out racial hierarchies altogether feels a touch too fantastical.

In some ways, Bridgerton could be read as an accidental metaphor for Britain's real-life rewriting of its own slave-trading past. That the Royal Family in particular had a major hand in transatlantic slavery ­– King Charles II and James, Duke of York, were primary shareholders in the Royal African Company, which trafficked more Africans to the Americas than any other institution – is hardly acknowledged today. "As [historian] David Olusoga is constantly arguing, there's this kind of whitewashing of these bits of colonial history – not really owning these details, these conflicts," says Scott. Instead, as University College London's Catherine Hall notes, the history of slavery in Britain has been told as "the triumph of abolition".

Olusoga himself has been among those digging up those details, and in 2015 he fronted the BBC documentary Britain's Forgotten Slaveowners, which, together with the UCL Centre for the Study of the Legacies of British Slave-ownership, looked into who was granted a share of the £20m ($28m) in compensation for their loss of "property" post-abolition. It's only in learning that this figure equates to £17bn ($24bn) in real terms (with half going to just 6% of the 46,000 claimants) – and that those payments continued to be made until 2015 – that we can begin to understand how much the slave trade shaped who holds wealth today.

It took the Black Lives Matter protests of last summer to accelerate the re-examination of Britain's slave-trading history, including its links to stately homes. In September 2020, the National Trust published a report which found that a third of its estates had some connection to the spoils of the colonial era; a month later, Historic Royal Palaces announced it was launching a review into its own properties. Unsurprisingly, the prospect of "decolonising" some of Britain's most prized country houses has sparked a "culture war" backlash, but a handful of figures among the landed gentry have been open to confronting the past. David Lascelles, Earl of Harewood, for example, has long been upfront about how the profits from slavery paid for Harewood House, even appearing in Olusoga's documentary and making the house's slavery archives public.

"Much more now, great houses are bringing [this history] to the fore and having the documentation in the home," says Scott. "Kenwood has done that to the extent that it has a copy of the portrait now… [and] the volunteers that take you around tell a much more conflicted story about it." Still, even as these stories are revealed in more vivid detail, how we reckon with the ways in which they've influenced our present – and maybe even remedy some of the injustices ­– is a conversation yet to be had.

With all those palaces, jewels and paintings, it's not hard to see why contemporary culture tends to romanticise black figures within the British upper classes. Works such as Dangerous Freedom are now offering an alternative view, stripping the aristocracy of its glamour, giving a voice to the enslaved and narrating the discrimination, isolation and tensions that we've seen still endure. The progressive fairytale – or utopian reimagining – will always have greater appeal. But perhaps, as Scott suggests, it's time for a new story to be written.

Dangerous Freedom by Lawrence Scott (Papillote Press) is out now.

Love books? Join BBC Culture Book Club on Facebook, a community for literature fanatics all over the world.

And if you liked this story, sign up for the weekly bbc.com features newsletter, called The Essential List. A handpicked selection of stories from BBC Future, Culture, Worklife and Travel, delivered to your inbox every Friday.