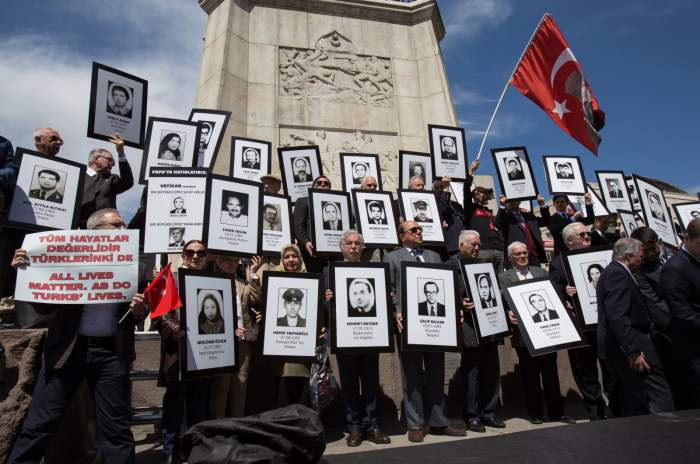 Between January 1973 and 1992, Armenian assassins murdered 37 Turkish diplomats and family members in 22 different cities and countries around the world stretching from Los Angeles, U.S. to Sydney, Australia.

Last month, hundreds of Armenians in Los Angeles gathered in Glendale, California, honoring the so-called “Lisbon Five.” The commemorations were organized by the Armenian Revolutionary Federation.

For many Armenians in Armenia and the diaspora, the Lisbon Five are true “national heroes” and martyrs on the so-called “altar of freedom."

However, the Lisbon Five are not martyrs and heroes. They are murderers; they are terrorists!

In 1983, five young Armenian men – aged between 19 and 21 – plotted an attack on the Turkish embassy in Lisbon, Portugal. They drove two rental cars to the Turkish Embassy. They planned to attack it and to hold hostages until their demands were met. They demanded that Turkey acknowledge the deaths of Armenians in the Ottoman Empire in 1915 as a genocide. 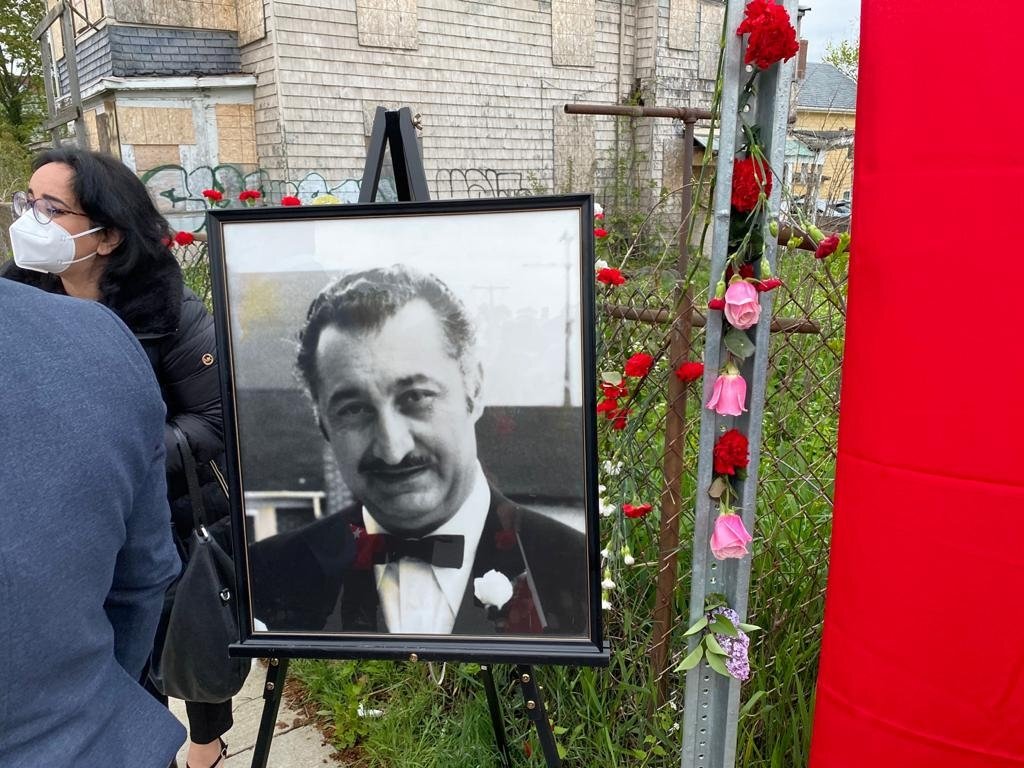 Diplomat Orhan Gündüz, who was martyred 39 years ago by the Armenian terrorist organization while serving as Turkey’s Honorary Consul General in Boston in the U.S., was commemorated at his grave in Boston, Massachusetts, U.S., May 5, 2021. (AA Photo)


A typed note to The Associated Press by the Armenian Revolutionary Army claimed responsibility for the deadly suicide attack. It said, “We have decided to blow up this building and to remain under its collapse. This is not suicide, nor an expression of insanity, but rather our sacrifice to the altar of freedom.”

Actually, what they did is the precise definition of insanity. As the adage goes: Insanity is “doing the same thing over and over and hoping for a different outcome.”

Between January 1973 and 1992, Armenian assassins murdered 37 Turkish diplomats and family members in 22 different cities and countries around the world, stretching from Los Angeles to Sidney, Australia. Lisbon was just one instance.

The Washington Post asked on July 31, 1983: “How many more Turkish diplomats will be killed by fanatical murderers from Armenian terrorist groups? The question has a raw answer: as many as the terrorists think they can put away without getting caught.”

Armenian terrorism, as we can see, is not new. It is also pervasive.

9 years later, in 1982, a second Turkish Consul General was murdered in cold blood by Armenian terrorists in Los Angeles. One of the terrorists escaped. The other one, Hampig Sassounian, was arrested, convicted and sentenced to life in prison without parole.

Just a few months ago, after almost 40 years in prison, Hampig Sassousian’s five different denials of parole from California prisons were finally overridden by the Los Angeles Superior Court. Governor Newsom of California decided not to appeal the Court’s ruling. So the terrorist Sassounian will soon be released.

Though his crime was in 1982, this year’s court ruling to let him go made worldwide news this year, including a condemnation by the Biden Administration.

Another infamous Armenian terrorist was Monte Melkonian, a native-born Californian of Armenian parents. In 1980, in Athens, Greece, Monte murdered a Turkish diplomat and his 14-year-old daughter.

Later, in France, he was arrested and sentenced to 5 years in prison and was deported when he finished his sentence. He then went to his parent’s homeland, Armenia, where he was given command of troops to invade and ethnically cleanse Azerbaijan’s Karabakh region in the early 1990s war. He personally participated in several mass atrocities against Azerbaijani civilians, the largest of which was at the town called Khojaly in 1992.

Monte Melkonian was killed in 1993 by Azerbaijani soldiers. Armenia immediately declared him a national hero, named a military academy after him and erected his statues. Yes, an assassin-for-hire terrorist is a national hero in Armenia, as is Hampig Sassounian, admitted murderer of a Turkish diplomat walking free on the streets of Los Angeles, as are the Lisbon Five! Recently, a large mural dedicated to Monte Melkonian was installed in an Armenian-populated part of Los Angeles.

With that vicious hate crime, the Armenian violent radicalism the world has experienced since the 1970s has returned to the United States. 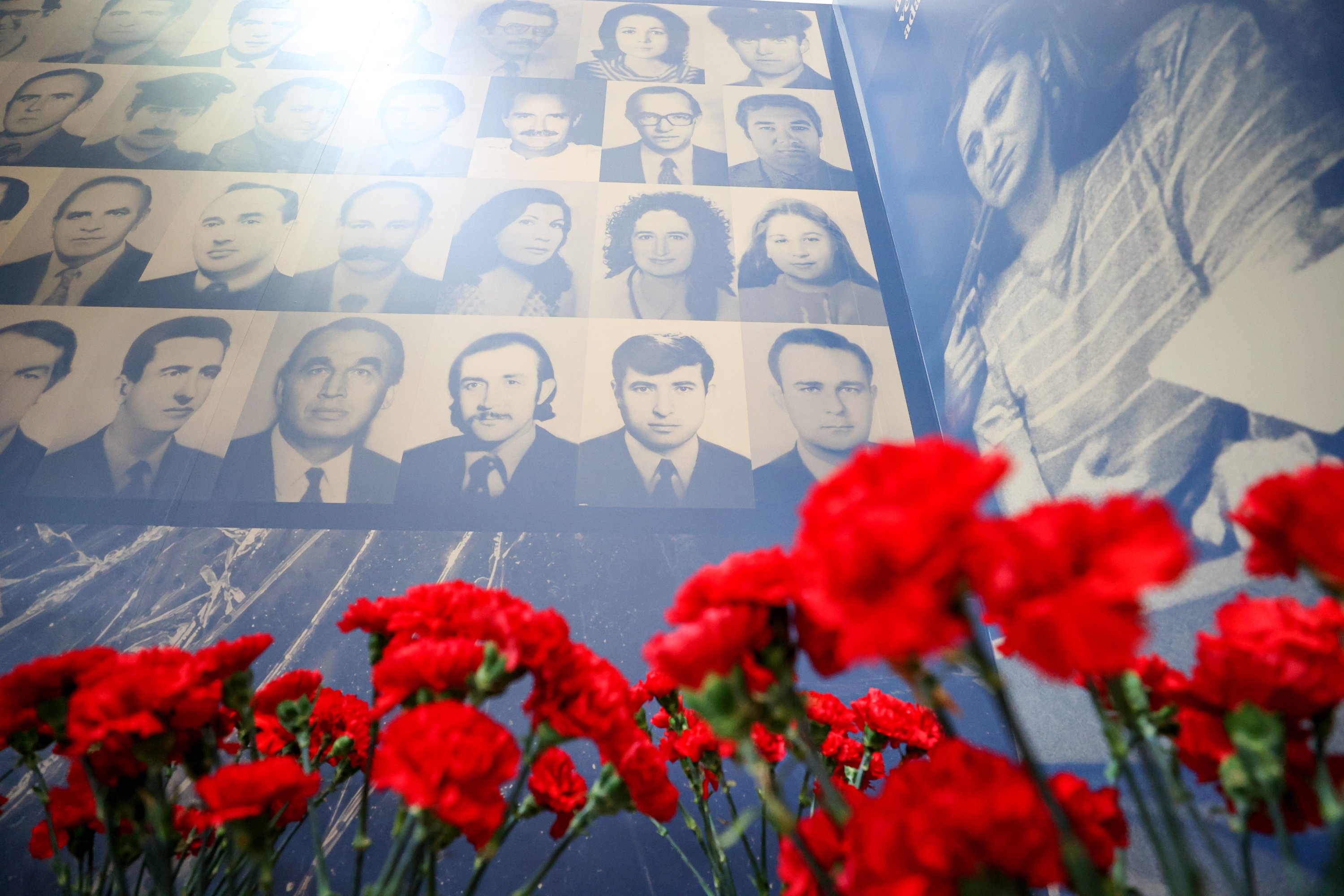 Turkey’s Directorate of Communications opens an exhibition in memory of Turkish diplomats killed by Armenian terrorists, in Los Angeles, U.S., on April 24, 2021. (AA)


The acts of terror

Let me stress, it is not welcome today, nor was it ever welcome when Armenian terrorists killed on the streets of Los Angeles, as well as planting and exploding many bombs throughout Los Angeles and neighboring Orange County. Those terrorist murderers and bombers were apprehended and jailed. In Sassounian’s case, he was in prison for almost 40 years.

The same radical Armenian Dashnak Party sympathized in the 1930s with Hitler and Nazi Germany and supported the Holocaust. The same Armenian party continues its existence in the U.S. despite its pro-Nazi past and support for domestic and international terrorism.

The lobbyist arm of Dashnaks is the Armenian National Committee of America (ANCA). ANCA was even chaired by Mourad Topalian, a suspected leader of the JCAG terrorist group and a participant in the 1980 bombing of the Turkish Mission in New York City. He was arrested and charged by the U.S. Government with conspiracy acts, possession and storage of weapons and explosives. In 2001, he was sentenced to 37 months in prison and three years of supervised release.

Instead of being ashamed of what Topalian did, ANCA presented him with a "Freedom Award" after he was arrested and charged. This is the same ANCA that manipulates Congress members in Washington to give millions of dollars to Armenia, a country that calls terrorists and murderers and Nazi collaborators “national heroes.” This is the same ANCA that sponsored the violent riot in Los Angeles last July that police are still investigating as a hate crime.

Yet many elected officials in the U.S. in general, and in California in particular, turn a blind eye to the true nature of radical ANCA and Dashnaks and continue to cater and pander to ANCA, accepting their campaign checks and parroting their narratives. They should wake up and dissociate themselves from radical and racist ANCA and Dashnaks.

Raoul Lowery Contreras is a US Marine veteran, political consultant and the author of “The Armenian Lobby & American Foreign Policy” and “The Mexican Border: Immigration, War and a Trillion Dollars in Trade.”

The original article was published in Daily Sabah.