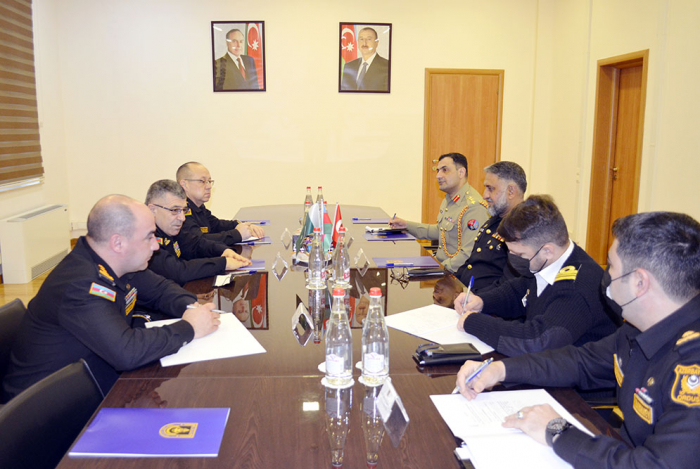 On March 2, the commander of the Azerbaijan Naval Forces, Rear Admiral Subhan Bakirov met with a delegation led by the Chief of the Naval Academy of the Islamic Republic of Pakistan, Rear Admiral Shifaat Ali Khan, the Defense Ministry of Azerbaijan told AzVision.az.

The Pakistani delegation is on an official visit to our country.

First, the guests visited the Alley of Shehids, laid flowers on the graves of our compatriots who became Shehids for the independence and territorial integrity of Azerbaijan.

Welcoming the guests, the commander of the Azerbaijan Naval Forces, Rear Admiral Subhan Bakirov emphasized that cooperation between Azerbaijan and Pakistan in the military sphere is based on friendly and fraternal relations that are constantly developing.

The guest expressed satisfaction with the visit to our country and noted the need to hold such meetings and expand cooperation in strengthening Azerbaijani-Pakistani relations.

The Pakistani delegation was briefed on the history and activities of the Naval Forces.

Then the guests inspected the warships, inquired about their tactical and technical characteristics. Detailed information was also provided on the accommodation of the ships' crew, the organization of nutrition, and other vital devices.

During the meeting, the sides exchanged views on the prospects for the development of cooperation between the Naval Forces of the two countries in the military, military-educational, and other spheres, as well as discussed issues of mutual interest.