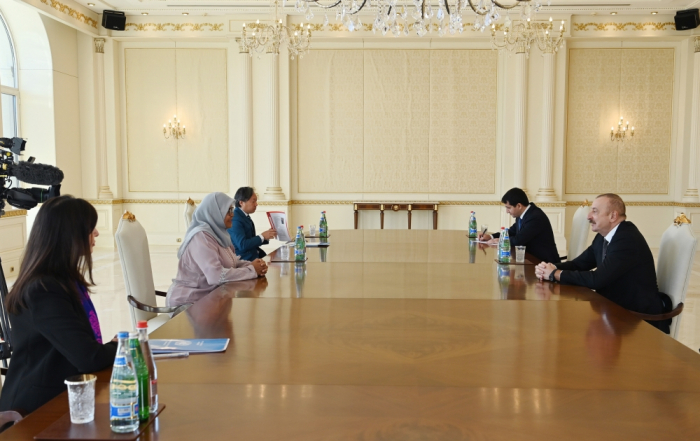 - Welcome to Azerbaijan. I am very glad to see you.

President Ilham Aliyev: I am glad that you are visiting us. As you know, we are a very active member of the UN and successfully cooperate with various UN agencies. I am glad that you are visiting us as the Executive Director of the UN Human Settlements Program – UN-Habitat. I am aware that you are promoting the values of equality, poverty reduction and urbanization. You probably know about our poverty reduction indicators. With regard to poverty reduction, I believe that we have successfully overcome this global scourge. Poverty rate in Azerbaijan is at about five percent. This shows that we have been able to use the revenues from the energy sector appropriately for the equal distribution of wealth. Of course, new opportunities for economic reforms and employment will create a new picture in Azerbaijan, because our population is growing. Therefore, issues related to employment and, of course, the level of poverty, which is directly related to it, are of particular importance.

Thank you for visiting the liberated territories. I know that you have been to Aghdam and seen the scale of destruction there with your own eyes. I can assure you that the situation is the same in all liberated territories. Everything has been destroyed. As a result of this vandalism and barbarism, there is no Aghdam now. The city, which used to be home to tens of thousands of people, now lies in ruins. This was committed by the Armenians, the Armenian criminal regime during the years of occupation. For almost 30 years, our cities, villages, historical and religious sites had been deliberately and systematically destroyed in order to erase the traces of Azerbaijani culture and history. However, the war for the freedom of our lands has shown that sooner or later justice will prevail. One needs to be patient. At the same time, we need to work hard on a daily basis to be loyal to the country and achieve our goals. Our war was a war of liberation. We have put an end to the occupation. We have put an end to the evil forces in our land. You are probably aware that the Armenians also insulted and destroyed our religious sites. Sixty-five mosques were completely destroyed, while the remaining two mosques were used for keeping pigs and cows, which was an insult to the feelings of Muslims around the world. Unfortunately, during all these years of occupation, the international community remained tight-lipped. As you know, despite the decisions and resolutions adopted by the UN Security Council, the General Assembly and other important international organizations in support of our position, there was no serious pressure on Armenia. No sanctions were imposed on Armenia. Some countries even tried to put the aggressor and the victim of the aggression on the same scale. These were the main reasons why the Armenians kept these territories under their control for such a long time. If we hadn’t shown courage, patriotism and strength, this occupation would have been continued. It seemed to us that the international organizations themselves had already adapted to the situation. Like some kind of a tourist group, the Minsk Group visited us several times a year to conduct meaningless negotiations. Now it is obvious that these talks were only intended to disguise Armenia’s attempts at reinforcing the consequences of the occupation. Armenians had changed the names of our cities and villages. Armenians did their best for this occupation to be forgotten in the world. But the Azerbaijani people had not forgotten that. None of us had forgotten that. We were all ready to sacrifice our lives to liberate our historical homeland, and it happened.

We now have great challenges ahead of us. I am sure that you have been informed about our plans. You may have seen a significant part of our reconstruction process. It is an immense job. So far, we have not received a single dollar of assistance from international organizations or any country in the world. We are doing all this work at our own expense. And we will continue to do so. But, of course, it is rather strange that almost a year and a half has passed since the liberation of the lands, but no-one is ready to help us. Just words, nothing else. There are no ideas of any donor conferences or financial support. Even well-known non-governmental organizations and well-known international foundations are turning a blind eye to what is happening in Karabakh and Zangazur. This is unfortunate. You know, we will restore the territories. As I said, we will create a paradise on earth in Karabakh and Zangazur. We will do it at any cost. However, I think that this indifference of international organizations, donor organizations and large foundations is completely unacceptable. We hope that the UN will support us through its institutions and communication channels, which will convey the important message that Azerbaijan needs support. We view your visit a sign of this support. I am sure you will report on what you have seen there. Because it is one thing when you hear, know or read about something, and coming and seeing everything with your own eyes is another.

It is also important to inform the world about Armenian barbarism. It must be punished. We punished them during the war in a way they will never forget, but the aggressor must also be punished at the international level. Of course, there is the issue of compensation. We demand compensation. We have already involved international institutions and legal groups to help us raise this issue in the international arena. So this is the plan. I think that for next year's program, we must adapt our cooperation to this important reality.

Currently, it is not possible to return our former IDPs to the liberated areas due to landmines. Unfortunately, so far more than 200 people have been killed or seriously injured by landmines. Clearing these areas of mines requires great experience and technical capacity. We must also create decent conditions for people to be able to return there, and the process has begun. I am sure that you will visit our country again, because this is a very important issue on a global scale. I believe that the way we will restore the territory the size of Lebanon will be a good example for other countries suffering from occupation, destruction and other serious problems. I am sure we can be an example for all other countries that have faced or are still facing the same problems as us. Welcome again. Thank you for being with us.

Saying that she was visiting our country for the first time, Maimunah Mohd Sharif, the Executive Director of the UN Human Settlements Program, said she was deeply impressed by the development processes ongoing in Azerbaijan under the leadership of President Ilham Aliyev, as well as the concept of town planning and development. Maimunah Mohd Sharif noted that Azerbaijan had a combination of antiquity and modernity, that modern buildings were in harmony with historical sites, adding that she was pleased with the modern urban transport and road infrastructure, which is an integral part of urban planning and urbanization.

Noting that she had spent a day in Aghdam, the Executive Director of the UN Human Settlements Program said she had familiarized herself with the development and urbanization plan of Aghdam implemented by the Azerbaijani government under the leadership of the President.

Maimunah Mohd Sharif hailed Azerbaijan's goal to implement a modern eco-city concept with zero emissions in the liberated territories, including Aghdam. She noted that the UN Human Settlements Program supported the construction of cities in post-conflict conditions and sustainable urban development concepts in various countries around the world, and was ready to work closely with the Azerbaijani government in this regard.