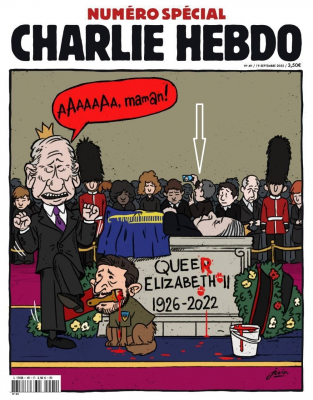 The satirical magazine 'Charlie Hebdo' released the front cover of its new edition, featuring an image of the Queen Elizabeth II's funeral.

The cartoon also featured Armenian president Vahagn Khachaturian, who has sparked outrage and anger after stopping to the lowest of the low by taking a selfie with Queen’s coffin.

Although cameras were strictly forbidden in the Westminster Hall where the Queen was lying in state, Khachaturian had his aide take his photo when “paying respects” on September 18.

Everyone who was allowed into the hall was provided with a quick briefing on the rules, however, that did not stop Khachaturian from posing for a photo at the foot of the coffin.