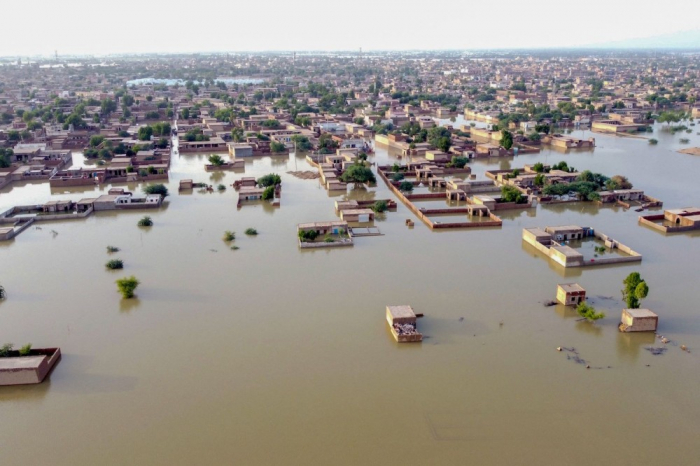 A total of 12,716 kilometers roads and 374 bridges have been damaged in torrential rains and floods throughout the Country since June 14, according to the data released by the National Disaster Management Authority (NDMA), DND News Agency reports.

In addition, 1,979,485 houses have suffered damages and 973,632 livestock have perished. However, during the last 24 hours, no further infrastructure damage took place. Meanwhile, the relief efforts by Pakistan’s armed forces continue in flood-affected areas. So far 574 Army Aviation helicopters sorties have been flown to various areas for evacuation of stranded people. In last 24 hours, 5 sorties have been flown and delivered 6.7 tons of relief items to the flood affectees.

So far 147 Relief Camps and 218 Relief Collection points in Sindh, South Punjab & Balochistan have been established across the Country for flood affectees. Uptill now 9597.5 Tons of food items along with 1627.3 tons of sustenance items and 8,851,438 medicine items have been collected so far.

However, 9476.9 Tons of food 1605.8 Tons of sustenance items and 8,838,728 medicine items have been distributed untill now. More than 300 medical camps established so far in which more than 319,867 patients have been treated all across the Country and provided 3-5 days’ free medicine.

In addition, 11 tent cities have also been established where 20507 Personnel have been accommodated. Moreover, Pakistan Navy’s 23 Emergency Response teams (ERTs) deployed all over Pakistan have rescued 15,393 stranded personnel. These ERTs are equipped with 46 motorized boats and 02 Hovercraft.

Pakistan Navy has also deployed 02 helicopters in interior Sindh. Uptill now, in 63 sorties, these helicopters rescued 475 stranded people and distributed 4,811 packets of ration. 08 Diving Teams of Pakistan Navy have also carried out 27 Diving Operations in affected areas across the Pakistan.

Pakistan Navy has also established 71 Medical Camps in which 73,734 patients have been treated till to date.

Moreover, PAF has established 45 Medical Camps where 59,296 patients have been treated so far. 20 tent cities accommodating 19,807 people and 54 relief camps have also been established.

PAF also carried out 258 sorties and evacuated 101 people from the flood affected areas in last 24 hours.