`Anti-Semitism in Armenia exists at a state level` - expert on intl. affairs 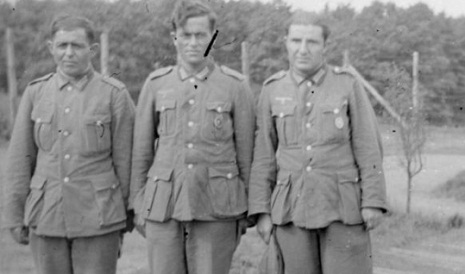 Armenian soldiers fought with the Axis powers during WWII. Photo from Wikipedia

Armenia immortalizes fascists, anti-Semites who participated in the Holocaust

A few days ago, former Armenian Prime Minister Hrant Bagratyan submitted a draft resolution recognizing the Holocaust in the country`s legislative body. However, when further explaining his move, he told the media: “Some say that we should not recognize the Holocaust unless Israel recognizes the genocide of Armenians.” This is just one bit of vivid evidence of the fact that anti-Semitism in Armenia exists at a state level.

Although the entire world community recognized the Holocaust as genocide of European Jewry right after the Nuremberg Trials, Armenia is reluctant to do so 70 years later. In Europe alone, German fascism annihilated six million Jews only because they were Jews; in contrast, Armenians became victims of the policy of Tsarist Russia, which promised to establish a state for them in the territory of the Ottoman Empire.

The end of Soviet rule removed constraint and anti-Semitic attacks in Armenia rose dramatically. That, and Armenia`s ongoing economic collapse, drove the Jews of Armenia to flee the country. In addition, the cultural violence has continued: Anti-Semitic books and TV programs are presented to the Armenian public and the Holocaust memorial in the capital of Yerevan is repeatedly defaced. Of course, many countries have suffered such unfortunate incidents -- the product of an ignorant populace. Nevertheless, in Armenia such views even have been espoused by mainstream politicians and media personalities.
One should mention the remarks of acclaimed scholar Moses Bekker, who said that it was Rimma Varzhapetyan (the so-called head of the Jewish community in Armenia) who saw no wrong-doing with the textbook and mass media glorification of antisemetic activists, such as Dramastamat Kanaya -- the fascist general “Dro.” During World War II, general Dro personally took part in the annihilation of thousands of Jews. In her works, Ms.
Varzhapetyan states that the current leadership of Armenia needs this “fighter” for the freedom of Armenia, thus employing the image of an ardent anti-Semite and fascist as a symbol for justifying Armenian expansionism and cultivating hatred amongst the younger generation. One must ask if, despite being Jewish herself, Ms. Varzhapetyan is ready to justify the murderous acts of Nazi criminals only because they are Armenians?
History seems to have forgotten the cruelty of the 20,000-strong Armenian legion that participated in the Wehrmacht in the WW II. Nationalist Commander Dro led the Armenian legion to fulfill its mission: to persecute and annihilate Jews via death marches. In his book “Death Tango,” the late Azerbaijani historian Rovshan Mustafayev presented evidence of Armenian involvement in the genocide of Jews, particularly a report from Sonderkommando “Dromedar” about operations in Western Crimea. “From November 16 to December 15, 1941, some 17,645 Jews, 2,504 Karaims, 824 Gypsies and 212 partisans were executed. Simferopol, Eupatorium, Alushta, Karasubazar, Kerch, Feodosia and other regions of Western Crimea were cleaned of Jews,” Rovshan Mustafayev notes in his book. Austrian historian Erich Feigl wrote that in December, 1942, Dro visited Himmler. “Dro had a practice of killing without any compassion, and this strongly impressed Himmler.”
What causes great concern today are the many media and the cultural spaces of Russia and by extention Armenian that provide a channel to present fascists as national heroes, including Dro, as well as Garegin Nzhdeh, an Armenian hero and Nazi collaborationist. Said the Ambassador of the Republic of Armenia (published December 17, 2014), the “Outstanding hero of our people Garegin Nzhdeh believed that ‘the main law of life is a struggle as a method of self-perfection of personality, society and state. This struggle is manifested in the striving for progress of the country and nation.’”

Sadly, there are successors to General Dro and Garegin Nzhdeh: incumbent Armenian president Serzh Sargsyan and Minister Seyran Ohanyan. These men led a bloody massacre of civilians in the Azerbaijani town of Khojaly in the late 20th century.
Suffice it to remember Serzh Sargsyan`s words: “before Khojaly, the Azerbaijanis thought that the Armenians were people who could not raise their hand against the civilian population. We were able to break that stereotype.” This bloody act of genocide, which was committed with incredible barbarism, is one of the horrible tragedies of the late 20th century. As a result, 613 people were killed, 487 wounded, and 1,275 civilians (including elders, children and women) were taken hostage and subjected to unprecedented torture and brutality. This tragedy is an act of evil against all of humanity.

The government of Armenia is doing almost nothing to prevent the growing anti-Semitism in the country. Several hundred Jews who now remain in Armenia will continue to suffer unless Armenia quits its policy of limited nationalism and stops blaming foreigners for their own economic and political problems.

Arye Gut is an expert on international affairs, based in Israel