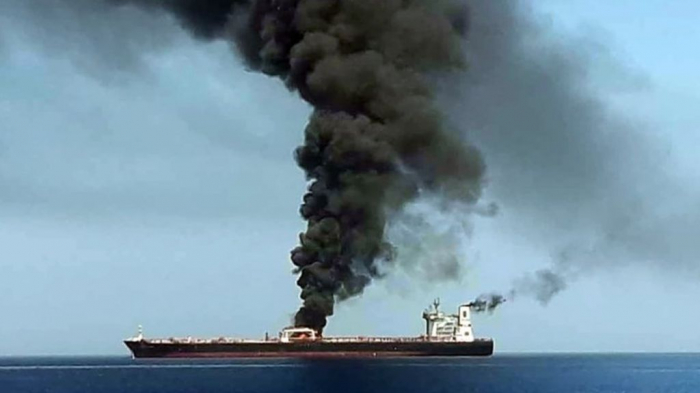 Iranian state news agency IRNA are reporting that the Front Altair oil tanker has sunk after being damaged in an explosion in the Gulf of Oman. The damaged tanker is thought to loaded with 75,000 tonnes of naphtha, a flammable oil.

Crew members of two fuel supertankers in the Gulf of Oman have been evacuated to safety after their ships were reportedly stricken and set ablaze Thursday amid rising hostility between Iran and its adversaries.

Iranian state news agency IRNA reported that the Front Altair oil tanker had sunk in the attack. The damaged tanker is thought to loaded with 75,000 tonnes of naphtha, a flammable oil.

However, a spokesperson from Frontline, in charge of the tanker, confirmed to The Independent that the vessel had not sunk “and is safely afloat.”

Separately, the ship’s technical operator, International Tanker Management, said the cause of the explosion was yes unknown.

The UK Maritime Trade Group, which is operated by the Navy, said it was aware of the incident and investigating, warning ships in the vicinity of the Indian Ocean to exercise “extreme caution”.

Both US and Iranian navies have reportedly responded to the incident by dispatching rescuers.

Konkuka Courageous, sailing from Saudi Arabia , and the Front Altair, which had loaded fuel in the United Arab Emirates, sent distress signals after sustaining damage shortly after transiting from the Strait of Hormuz, according to news reports and company officials cited by international media.

Iranian media cited sources saying the damage was caused by explosions in quick succession. There was no claim of responsibility for any attack.

The owners of the Kokuka Courageous issued a statement saying it was carrying a cargo of ethanol and that the ships hull had been breached “as a result of the suspected attack.”

Iran’s official news agency media said earlier on Thursday Iranian search-and-rescue vessels saved 44 crew members from one of the ships and brought them to a nearby port.

Japan’s ministry of trade has said that both ships were bound for the country and the incidents are still being examined by maritime and security officials.

This come as Japanese Prime Minister Shinzo Abe makes a historic visit to Tehran in an attempt to serve as a mediator between Iran and the administration of United States President Donald Trump.

Mr Abe, the first Japanese premier to visit Iran in more than 40 years, met Thursday with Supreme Leader Ali Khamenei. The incidents sent world oilprices up as much as 4.5 percent, and will likely ratchet up hostility between Iran and the United States.

Washington, backed by Saudi Arabia and the UAE, has imposed harsh sanctions on Iran over its missile programme and support for armed groups in the Middle East. It has demanded that companies stop buying Iranian energy products or be barred from doing business with the United States.

Iran’s economy has withered under the sanctions, and Iranian officials have vowed to respond by punishing Washington and its allies. The Strait of Hormuz, through which almost a fifth of world oil supplies transits, is a waterway that abuts Iran and Oman is just 21 miles at its most narrow point.

Norway and the United Arab Emirates claimed that an unspecified “state actor” was likely behind attacks on four vessels last month off the coast of Fujairah. US officials have accused Iran of being behind the attacks, but have provided no proof.

Saudi Arabia accused Iran of being behind a missile attack Wednesday on a civilian airport in its southern city of Abha that was claimed by Tehran’s Yemeni allies, the Houthi militia, which is in a conflict against Riyadh and its allies.

Both ships were close to a major naval base called Jask, and suspicion for their damage will fall on Iran, which can hurt Mr Trump by causing a spike in fuel prices just before summer holidays in the U.S. But Iran’s foreign minister, Javad Zarif, quickly denied his nation’s culpability. “Reported attacks on Japan-related tankers occurred while PM Shinzo Abe was meeting with Ayatollah Khamenei for extensive and friendly talks,” he wrote on Twitter. “Suspicious doesn’t begin to describe what likely transpired this morning.”

Tokyo, once a significant customer of Iranian energy, enjoys warm relations with Tehran while Mr Abe and Mr Trump have built up a rapport. But early indications suggested there Mr Abe was unable to convince Iranian authorities to accede to United States demands to reopen negotiations over Iran’s nuclear programme and a range of other issues.

“We have no doubt in Shinzo Abe’s goodwill and seriousness,” Ayatollah Khamenei’s Twitter account said. “But regarding what you mentioned from U.S. president, I don’t consider Trump as a person deserving to exchange messages with; I have no response for him and will not answer him.”