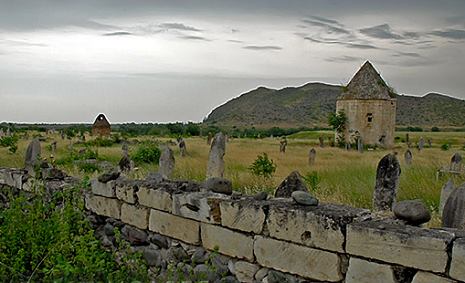 The history of Karabakh is rooted in antiquity. It is one of the historic provinces of Azerbaijan.

This region is (or perhaps better stated) was an important political, cultural, and spiritual center.

Ever since Armenia became a tiny state in 1918 it has made bogus claims on lands belonging to its neighbors – Georgia, Ottoman Empire, and Azerbaijan. The so- called “Karabakh problem” is a creation of the false claims made by Armenians.

From the fourth century BC to the eighth century AD, the territory of the current Nagorno-Karabakh region of Azerbaijan was one of the provinces of Caucasian Albania, the most ancient state of Northern Azerbaijan. Karabakh has never been a part of the Armenian state until the Armenians captured it by brute force in 1992.

The actual truth is there were few Armenians even in the Caucasus region at all in 1800. Christian Armenians were brought into the Caucasus by the Russians starting in the early to mid-1800s and given free lands – lands the Russians had taken from Muslims after forcing them out of the region at gunpoint.

Between 1907 and 1912, the Russians assisted more than 500,000 Armenians to move from Iran and other Ottoman Empire lands into Kars, Erivan, and the Yelizavet-pol districts where most of the population was Azerbaijani Muslims.

The Azerbaijan Democratic Republic, the first democratic state in the Muslim world, was established on May 28, 1918. One of the first steps this new republic did was to attempt to establish good relationships with its neighbors. The second day of its existence, Azerbaijan gave the town of Yerevan to the Republic of Armenia, which had declared independence but had no political center. The new state of Armenia was composed of only the Erivan and Echmiadzin districts and had only 400,000 residents. Whereas Azerbaijan worked for cooperation and peace, the Armenians worked to get more free land by the use of terror for their tiny state.

After Armenians lost a war with Georgia, it launched a second attack on Azerbaijan. During this war the Christian Armenians destroyed 115 Azerbaijani villages, murdered more than 7,000 Azerbaijanis, and forced more than 50,000 Muslims from their homes. The Azerbaijanis fought back, and the Armenians retreated.

Even after being thrown out of Azerbaijan, the Armenian leaders continued their land grab attempts in Azerbaijan in 1920 by launching guerilla punitive activities in Karabakh, Nakhchivan, and Zangezur. That same year the Russian Bolsheviks invaded Azerbaijan, and soon afterward took Armenia without having to fire a shot.

Even the Russian Communists agreed that Karabakh was a part of Azerbaijan. The Russians made a common sense decision. The only road into Karabakh ran to Baku in Azerbaijan. There was no road from Karabakh into Armenia.

As the Soviet Union broke up in the late 1980s, the Armenians began to clamor that Muslim Azerbaijan was discriminating against the Christians in Karabakh. This simply is not true. The real reason was the Armenians wanted to expand their tiny state.

Armenians, living within Karabakh, assisted their Armenian state friends once the Muslims were driven out by declaring a state of their own – a de facto, non-recognized state called the Republic of Nagorno-Karabakh. The Armenian leaders claimed they had nothing to do with the rebellion within this region. This is yet another Armenian tall tale in an attempt to deceive the world of their real ethnic cleansing actions.

Armenians claim to be the last real Christian state in the Caucasus and that they are surrounded by enemies. They don’t mention that Georgia is a Christian state and the fact Armenians started a war with this Christian neighbor too.

The former Azeri city of Aghdam is but one of many examples of Armenian total destruction. Ten years ago, it enjoyed a large Azerbaijan Muslim population. Today what is left is completely deserted. A looted ruin is all that remains. This is typical of every Muslim Azerbaijani city and village in Karabakh.

Reconciliation can only happen if both sides are honest, fair, and just.

Attorney Krikorian stated that because of the Soviet Union and the genocide and a lot of other reasons, Armenians and Turks have not had the kinds of mature discussions they needed to have to resolve their differences. He says they lobbied the U.S. government to accept the Armenian position and impart that to the Turkish government and other countries.