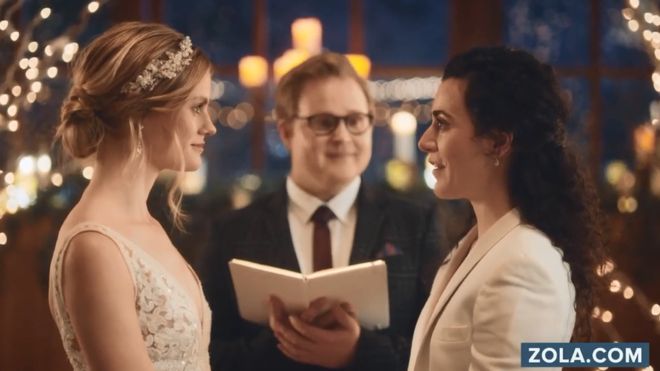 The chief executive of Hallmark Cards has apologized for its decision to withdraw television advertisements featuring same-sex couples.

The company's cable network pulled the ads for wedding registry and planning site Zola under pressure from the conservative group One Million Moms.

The decision drew criticism on social media and calls for a boycott.

Hallmark said it would reinstate the adverts and attempt to re-establish its partnership with Zola.

"We are truly sorry for the hurt and disappointment this has caused," Hallmark's president and chief executive Mike Perry said.

In a statement posted to its website, Hallmark said it would "be working with [advocacy group] Glaad to better represent the LGBTQ community across our portfolio of brands."

The #BoycottHallmarkChannel hashtag, which was launched by Glaad, featured in over 16,000 tweets as of Sunday afternoon.

Saturday Night Live performed a skit which mocked Hallmark's decision, concluding with the line: "This is Emily Cringle for Hallmark, reminding you to stay straight out there."

The original decision to withdraw the advert was prompted by complaints from a conservative activist group.

One Million Moms is an online project of the American Family Association, which is a long-time opponent of gay rights.

One Million Moms said it had personally spoken to Bill Abbott, who's the chief executive of Hallmark's parent company Crown Family Networks.

According to the site, Mr Abbott told them Hallmark had withdrawn the commercial and the advertisement aired in error.

Crown Media notified Zola that four of its ads would no longer be airing, with the explanation that Crown Media is "not allowed to accept creatives that are deemed controversial".