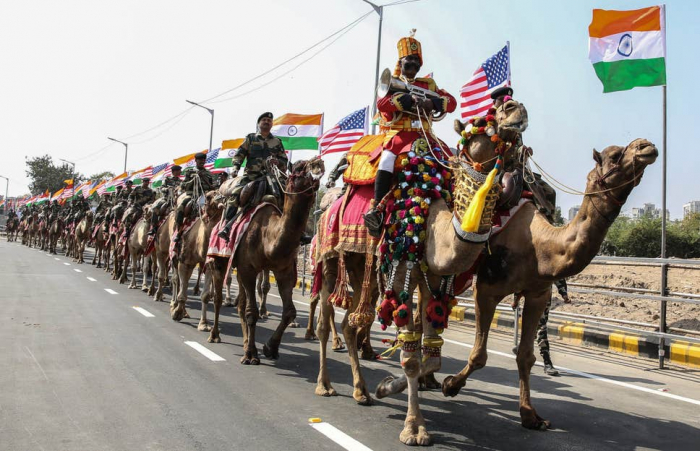 Donald Trump will be treated to the view of a sanitised version of an Indian city when he arrives here in Ahmedabad on Monday afternoon for the start of a two-day state visit that is also his and Melania Trump’s first to the country.

Furious last-minute preparations continued over the weekend as 22km of streets leading from the airport to a brand new, world’s-largest, cricket stadium were cleared of litter, widened, given a fresh lick of paint and lined with metal barriers.

Stray cows were loaded into yellow cattle trucks, to be taken outside the city limits and released, while tens of thousands of police and security personnel patrolled roads, including some riding in formation mounted on camels.

The Trumps are expected to touch down in Air Force One around 1pm local time, where they will be met by prime minister Narendra Modi and then led past a “roadshow” of stages representing the 28 states of India, culminating in a “Namaste Trump” rally in the 110,000-capacity Motera stadium.

But while giant billboards along the route to the stadium proclaim the meeting in Modi’s home state to be one of “two dynamic personalities [on] one momentous occasion”, not everyone in the city is happy with either the expense or methods of the vast clear-up operation.

It is estimated that up to 1.5 million of Ahmedabad’s 7 million people live in informal, slum housing or on the streets, and homeless daily labourers told The Independent they had been repeatedly displaced, at times violently, by police clearing the way for Trump’s roadshow.

Tulsi, a 55-year-old construction worker and grandfather, said he and his family were threatened with sticks and shoved by armed police clearing the road, while municipal workers confiscated and destroyed their blankets and clothing.

“We voted for Modi for chief minister [of Gujarat, the state of which Ahmedabad is the capital] and twice as prime minister, and this is how he thanks us,” said Tulsi, holding back tears. “I can’t get a regular job, the pay for daily work is not good, and now I have to keep moving from place to place every other day with the kids. This [visit] is just adding to our problems.”

Tulsi’s daughter-in-law, Santosh, said the place they had been moved to had no water, so she had to walk half a kilometre with her young daughters to bathe. “It is dangerous for women,” she said. “Especially having to move around with the children. I am scared for them.”

The Indian authorities are estimated to have spent some £11m on preparations just in Ahmedabad, where the Trumps are only expected to spend around three hours of their 34-hour stay in India. After the stadium rally, they fly on to see the sunset at the Taj Mahal outside Agra, before a round of high-level trade talks in Delhi on Tuesday.


The expenditure for the Ahmedabad leg is estimated to be the equivalent of around 1.5 per cent of the entire state’s annual home ministry budget.

“They could have spent that money on something better, on helping the poor,” said Tulsi. “For that amount they could have provided for so many people. Of all people I thought our prime minister, a tea-seller from Gujarat, would have understood this.” Asked if he would vote for Modi again, he said no.

Part of the money has gone towards a brand new, hastily constructed 700m-long wall, more than 6ft high in some places, that residents say is being used to obscure the view of slums along the roadshow route.

Speaking from a shack behind the wall, Sardar Saraniya told AFP Modi was “hiding us behind here”. “We’re made invisible. So the gutter we live in, Trump won’t see us. That’s why they’re building this.”

Residents told Reuters they had been offered 200 Indian rupees (£2.15) to turn out as cheering spectators along the motorcade route, echoing reports that people were to be bussed in from outside the city and paid to attend. Trump has said he is expecting between 6 and 10 million people to greet him, though Indian officials have said they estimate only around 100,000 in addition to the stadium guests.

Saraniya, a slum resident and father of three, said Trump was “our guest, and we will welcome him – if we can see him”. But he added: “Priority should be given to us – at least the basics should be provided. I wake up every morning and think about how I am going to earn enough money to feed my children.”

There was last-minute uncertainty on Sunday over whether the Trumps would visit the ashram in Ahmedabad where Mahatma Gandhi lived for 13 years, launching India’s independence movement. Officials there said the site was receiving a “general facelift” in case the decision was made to include it as a stop.

Modi has brought several world leaders to Ahmedabad during previous state visits, all of whom have taken the time to visit the ashram.

But in terms of the scale of the security operation, Trump’s was “definitely the biggest” in recent history, said Mayank Chavda, the police inspector general in charge of overseeing the roadshow – “much bigger” than the visits of Japanese prime minister Shinzo Abe, Israel’s Benjamin Netanyahu or the Chinese president Xi Jinping in 2014.

Chavda told The Independent in an interview that he felt “very happy and very lucky that Ahmedabad was chosen” for the stadium rally, India’s reciprocation for the “Howdy Modi” event held to honour the Indian prime minister last September in Texas.

The new wall, he said, was being built “because of security reasons”, and was a “long-pending project”. And asked about concerns that the city’s homeless were being forcibly moved out during the clear-up, he said: “It is fake news. No one has been forced to move by police, you show me the place [where this happened]. Anyone who has moved, they did so of their own [volition].”

After the pomp and extravagance of the Ahmedabad leg, Tuesday’s trade talks are being framed by the Indian government as the main event of the state visit, where it had been hoped real breakthroughs would be made to improve strategic cooperation and reduce trade tariffs between the two countries.

But hopes of a meaningful trade deal have waned, particularly since Trump’s comments last week that “we’re not treated very well by India ... They’ve been hitting us very hard for many, many years [on trade]”. The US president did hastily add: “I really like Prime Minister Modi.”

The personal rapport built over eight past meetings did not mean Trump would shy away from mentioning the growing international concerns at authoritarian moves by Modi’s Hindu nationalist government, a senior White House official told reporters in a conference call on Friday.

Since his second landslide election victory last May, Modi has moved to strip Muslim-majority Kashmir of its autonomy, start plans for construction of a Hindu temple on the controversial site of a torn-down mosque, and amend citizenship laws in a way that excludes Muslims.

Michael Kugelman, deputy director of the Asia programme at the US-based Wilson Centre, described the Trump visit as a “useful distraction” for Modi, who has been facing some of the most sustained, widespread protests India has seen in decades in response to these changes.

Trump “will raise these issues, particularly the religious freedom issue, which is extremely important to this administration”, the White House official said. “And I think that the president will talk about these issues in his meetings with Prime Minister Modi and note that the world is looking to India to continue to uphold its democratic traditions [and] respect for religious minorities.”