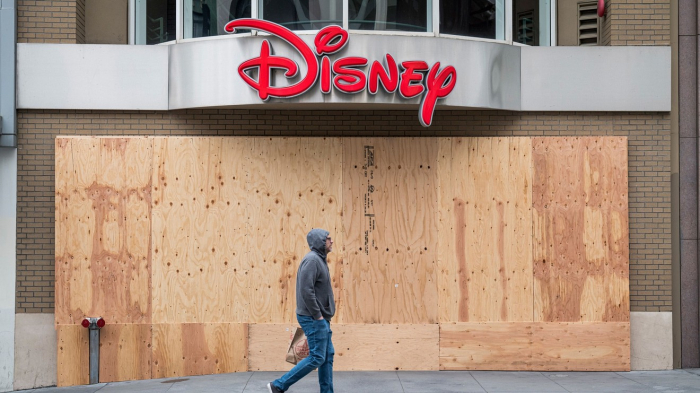 Concerns about a long recovery period for Walt Disney Co.’s parks segment have prompted at least the third downgrade of the media giant’s stock this month.

UBS analyst John Hodulik became the latest analyst to move to the sidelines on Disney DIS, -4.09% shares, as he lowered his rating to neutral from buy in a Monday note titled “The Eye of the Storm.” The shares are off 3.7% in morning trading.

Hodulik warned that all aspects of Disney’s business face risk from the COVID-19 outbreak, but none more so than the company’s parks segment. His base case now assumes that the company won’t be able to reopen its parks until Jan. 1, 2021, and he expects the company’s attractions business to remain pressured even beyond then.

”[T]he economic recession plus the need for social distancing, new health precautions, the lack of travel and crowd aversion are likely to make this business less profitable until there is a widely available vaccine,” Hodulik wrote, while cutting his price target on Disney’s stock to $114 from $162.

Hodulik said that the parks may be able to “regain their recent operating cadence in ~18 months, coinciding with the earliest expectations for a widely available vaccine for COVID-19.”

He also has concerns about the company’s media business. The lack of live sports content is already negatively impacting Disney to the point where its weak advertising trends “will lead the industry down,” in his view.

It’s unclear when sports leagues will resume and whether a return to competition would be permanent. Any changes to professional or college football seasons could have repercussions across the business, Hodulik said, not only hurting advertising revenue but also likely pressuring affiliate revenues “given greater cord-cutting and distributors’ reluctance to pay.”

He sees “real risk to the college football season this fall given the decentralized nature of college athletics, the coordination required across schools and conferences and the amateur status of the players (i.e. it’s much harder to quarantine unpaid players).”

As for Disney’s film business, he notes that the timing of the outbreak “could have been worse” for Disney seeing as the company had a somewhat weaker film slate anyway for the balance of the year following a very strong 2019. He expects a gradual recovery for the box office but said that the pandemic gives media companies a chance to try out new release strategies by narrowing the window between when movies are released to theaters and when they become available for purchase at home.

He also sees the company’s new Disney+ streaming service as “a bright spot” as he now models 70 million subscribers by the close of the fiscal year, which ends in September, compared with his prior estimate for 45 million. The company announced in early April that Disney+ had topped 50 million subscribers.

Hodulik’s ratings change comes after analysts at Guggenheim and Wells Fargo also downgraded Disney’s stock earlier in April, with both citing concerns about the parks business. Of the 27 analysts tracked by FactSet who cover Disney’s stock, 18 rate it a buy and 9 rate it a hold, with an average price target of $129.96, 26% above recent levels.

Disney shares have lost 29% over the past three months as the Dow Jones Industrial Average DJIA, -2.44% , of which Disney is a component, has declined 19%.