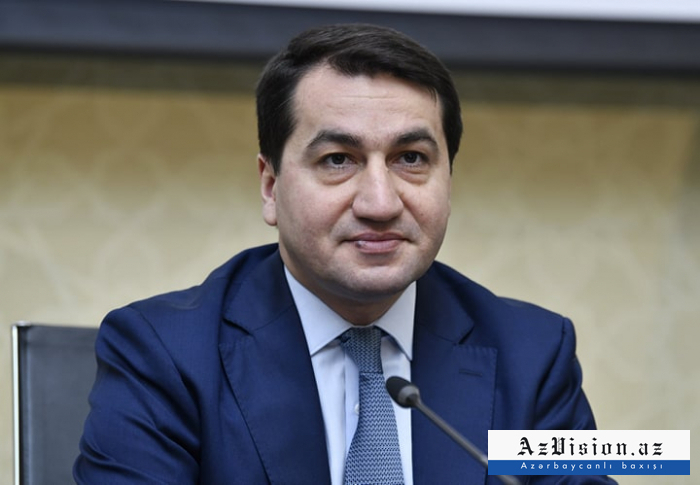 Assistant to the President of the Republic of Azerbaijan, Head of Foreign Policy Affairs Department of the Presidential Administration Hikmat Hajiyev has given an interview to AZERTAC following the Armenian foreign minister’s response to a statement by Russian Foreign Minister Sergey Lavrov.

- In response to a statement by the Minister of Foreign Affairs of the Russian Federation, Sergey Lavrov, the Armenian foreign minister said that Azerbaijani territories would not be freed from occupation, denied and rejected the proposals on a phased settlement of the conflict made within the framework of negotiations. What is your take on that?

- This statement by the Armenian foreign minister draws a line through the process of negotiations on the settlement of the Armenia-Azerbaijan conflict mediated by the OSCE Minsk Group co-chairs. Such a destructive statement by the Armenian side represents a serious blow to the negotiating process and disrupts the talks. At the same time, it is disrespectful to the co-chairs of the OSCE Minsk Group.

The stage-by-stage settlement of the Armenia-Azerbaijan conflict on the basis of the principles of the Helsinki Final Act and UN Security Council resolutions and the withdrawal of Armenian troops from the territories around the Nagorno-Karabakh region of Azerbaijan as a first step in this process are reflected in the statements by the heads of co-chair countries. The statement by the co-chairs from 9 March 2019 also reiterates the position on a phased settlement of the conflict.

The known UN Security Council resolutions condemn the use of force against Azerbaijan, reaffirm Azerbaijan's territorial integrity and sovereignty, and demand an immediate, complete and unconditional withdrawal of Armenian troops from the occupied territories.

During a roundtable discussion with members of the A. M. Gorchakov Public Diplomacy Fund on 21 April, Russian Foreign Minister Sergey Lavrov touched upon the UN Security Council conflict-related resolutions and spoke about plans and proposals on a step-by-step settlement of the Armenia-Azerbaijan conflict.

If Armenia aims to withdraw from the negotiating process by making such destructive statements, then it must declare its position openly. The co-chairs of the OSCE Minsk Group must also give an assessment to such a destructive position of Armenia and express their own position.

As stated by President Ilham Aliyev, Azerbaijan's position on the conflict is resolute, unequivocal and clear. President Ilham Aliyev reiterated this position at a plenary session of the 16th Annual Meeting of the Valdai International Discussion Club and in an open debate with the Armenian Prime Minister on the sidelines of the Munich Security Conference.

As President Ilham Aliyev noted at a meeting on the socioeconomic results of the first quarter of 2020, the position of the international community in connection with the illegal elections in the occupied territories of Azerbaijan dealt a severe blow to Armenia's position. No-one recognizes this illegal junta. Numerous international organizations and states, including the Non-Aligned Movement, the OSCE Minsk Group co-chairs, the European Union, NATO, the European Parliament, the Turkic Council, the Organization of Islamic Cooperation and others, made statements on non-recognition of these elections. The conflict must be resolved in accordance with the Helsinki Final Act, UN Security Council resolutions, norms and principles of international law within the framework of Azerbaijan's territorial integrity.