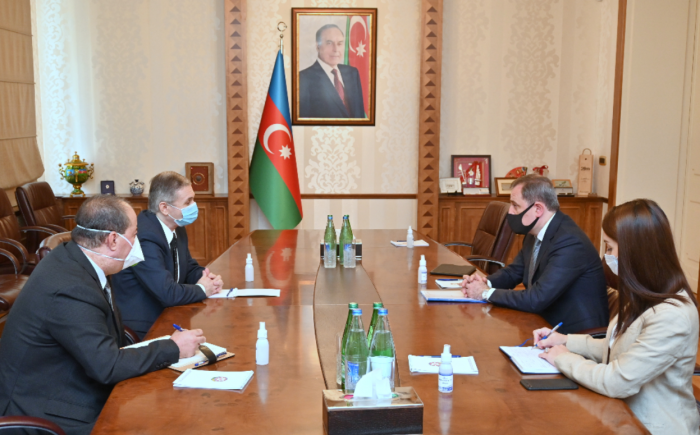 Bayramov spoke about friendly relations and cooperation in both bilateral and multilateral formats between Azerbaijan and Palestine and expressed confidence that this cooperation will develop in the future.

The sides stressed that bilateral visits, as well as mutual support of the sides in the international arena, make a great contribution to the development of these relations.

Nasir Abdulkarim Abdurrahman expressed gratitude for the warm welcome. While congratulating Bayramov on his appointment as Azerbaijani foreign minister, the ambassador wished him good luck in his activity aimed at ensuring the national interests of Azerbaijan on international arena.

Nasir Abdulkarim Abdurrahman stressed that Palestine firmly supports Azerbaijan’s territorial integrity and expresses support for the implementation of the resolutions adopted by the UN Security Council.

The ambassador also expressed gratitude to Azerbaijan for its support.

Abdurrahman expressed condolences to the families of the Azerbaijani servicemen who died as a result of the military provocation of the Armenian armed forces, which was committed on the Azerbaijani-Armenian border on July 12.

It was noted that by this provocation Armenia did not achieve any of the set goals, on the contrary, it again demonstrated its aggressive nature and faced a resolute position of the international community.

Noting that the tension is observed in the region as a result of Armenia’s aggressive policy, Bayramov stressed the need to eliminate the consequences of the Armenia-Azerbaijan Nagorno-Karabakh conflict and the fact that the ongoing negotiations on the conflict settlement must serve this purpose.

Bayramov stressed that Azerbaijan requires the negotiations on the merits, focused on a specific result and the country does not participate in them only for the sake of negotiating.