The Jerusalem Post has published an article by Maayan Jaffe-Hoffman hailing Azerbaijan's exemplary model of tolerance and open society.

Headlined “Azerbaijan to UAE: Four ways you will benefit from peace with Israel”, the article reads: “Abu Dhabi’s Crown Prince Mohammed bin Zayed’s decision to normalize ties with Israel was well calculated – a move that was made with the understanding that the technology, geopolitical and religious rewards would far outweigh any risks.

This is the first Mideast peace treaty in 26 years, but it is not unprecedented for a Muslim-majority country and Israel to enjoy strategic ties. Muslim-majority Azerbaijan and Israel established diplomatic ties in April 1992 that have been developing ever since.

Abu Dhabi’s Crown Prince Mohammed bin Zayed’s decision to normalize ties with Israel was well calculated – a move that was made with the understanding that the technology, geopolitical and religious rewards would far outweigh any risks.

This is the first Mideast peace treaty in 26 years, but it is not unprecedented for a Muslim-majority country and Israel to enjoy strategic ties. Muslim-majority Azerbaijan and Israel established diplomatic ties in April 1992 that have been developing ever since.

“Normalization between Israel and the UAE is a historic step towards a future of peace, prosperity and hope,” wrote George Deek, Israeli ambassador to Azerbaijan on Twitter on Friday. “For nearly 30 years, Azerbaijan has been a model to other Muslim-majority countries, showing what could be achieved through partnership & friendship with Israel.”

Similarly, wrote Mark Dubowitz, “as we celebrate UAE-Israel normalization, remember Azerbaijan was a pioneer in its friendship with Israel. It is an example of what is possible between Muslim-majority countries and Israel. Baku’s open relations helped ease the acceptance of Israel in the wider Muslim world.”

Dubowitz is the CEO of the Foundation for Defense of Democracies, a non-profit think-tank.

The Jerusalem Post asked Azerbaijani Ambassador to the United States Elin Suleymanov how the UAE could be expected to benefit from a peace treaty with Israel.

Israel has become an indispensable partner to Azerbaijan when it comes to technology, especially in the realms of agritech, telecommunications and defense, Suleymanov said.

He noted that before coronavirus, Azerbaijani delegations would regularly travel to Israel to meet with tech leaders and educators to learn best practices and then return to their country to teach their colleagues and students.

Peace with Israel buys a great deal of goodwill in Washington, analysts have long assumed, and Suleymanov confirmed that the warm ties between the countries have significantly increased its influence on Capitol Hill.

Moreover, religious life among the small Jewish community of Azerbaijan is actively encouraged by the government, according to the ambassador. Older synagogues have been refurbished and new ones constructed. In the village of Qirmizi Qesebe, where many Jews live, there is even a yeshiva and kosher butcher shop.

“We are seen as a tolerant, open society of Muslims – there is a clear benefit to this,” Suleymanov said.

“Of the 57 Muslim nations in world, there is no other country that is more supportive of Israel and no other country that treats its indigenous Jewish community with such respect and administration,” Rabbi Marc Schneier, president of the Foundation for Ethnic Understanding, told the Post.

Schneier has called Azerbaijan “one of the darlings of American-Jewish leadership” and noted that Azerbaijan has sent an example for wider Muslim world that celebration of strong ties with Israel undoubtedly leads to respect and support of the American congress.

Israel in general, and Jerusalem specifically, is home to a number of Muslim holy sites. The most obvious is the Temple Mount, where al-Aqsa Mosque and the Dome of the Rock are situated.

“Israel has all these important sites,” Suleymanov said, noting that many tourists from Azerbaijan make pilgrimages to Israel to see them.

Finally, Suleymanov said, people-to-people contact has made the relationship between his country and Israel blossom. He said over the years the people have built friendships and trust.

He said that his country has benefited from cultural exchanges and Israeli tourism.

The White House statement on the future of Israel-UAE relations noted that a future bilateral agreement would include “tourism, direct flights… and other areas of mutual benefit.”

“I like to think of our relationship as an example for what is possible,” Suleymanov said. “At the end of the day, a peace treaty is a great thing.” 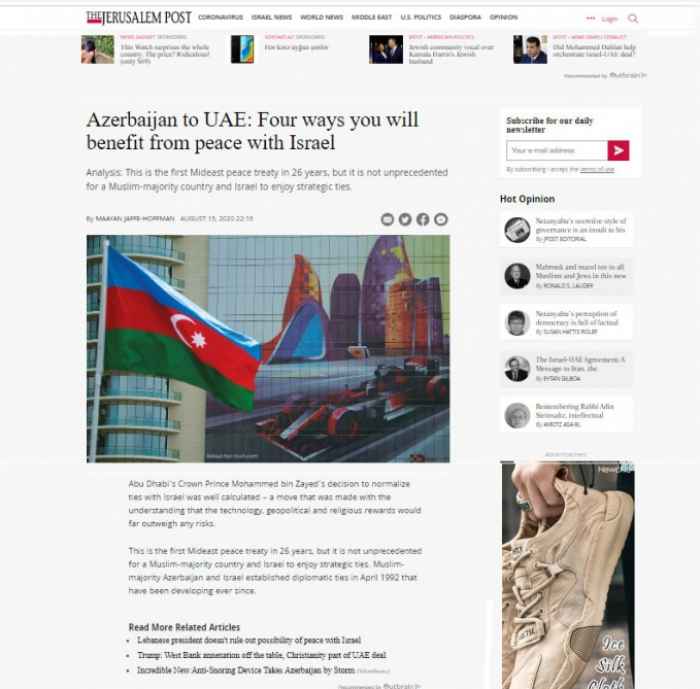