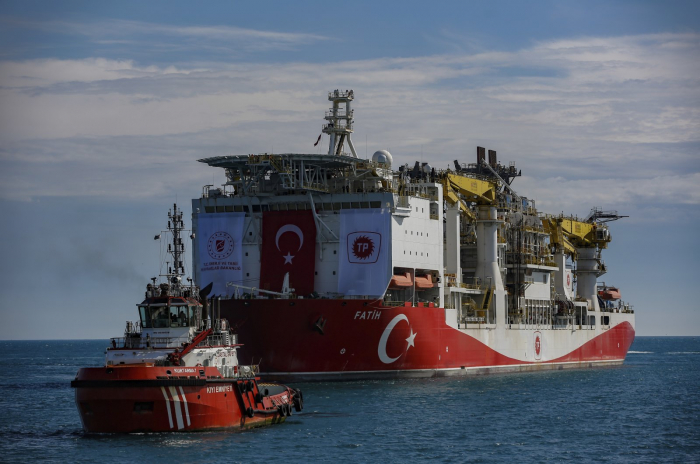 Fatih Dönmez’s remarks came after Turkey earlier announced its biggest ever natural gas discovery, a 320 billion cubic meter (bcm) Black Sea field, which President Recep Tayyip Erdoğan said was a part of even bigger reserves and could come onstream as soon as 2023.

"Globally, gas prices are oil-indexed. We can say that the economic value of 320 billion cubic meters of natural gas reserves discovered in the Black Sea could reach $65 billion if we look at it from a perspective of gas prices over the last 3-5 years," Dönmez told public broadcaster TRT.

The operation of the natural gas field will be handled by state-owned energy company the Turkish Petroleum Corporation (TPAO), Dönmez said.

“In the upcoming period, we will perform seismic research and drilling by ourselves ...The operation will be completely handled by TPAO,” the minister said.

Dönmez also said there may be an international tender to build a pipeline to bring the natural gas to the shore.

“Turkey has made the biggest natural gas find of its history in the Black Sea,” President Erdoğan said in a widely anticipated televised address in Istanbul, linked by video to a drillship in the western Black Sea.

The discovery at the well, labeled Tuna 1, in the Sakarya Gas Field, which is around 170 kilometers off the Black Sea coast, is the result of Turkey's determined efforts to find domestic hydrocarbon resources.

Turkey’s first oil and gas drilling vessel, the Fatih, which started drilling in the location on July 20, 2020, discovered the well after a month of drilling.

“This reserve is actually part of a much bigger cache of resources. God willing, much more will come," Erdoğan said. “There will be no stopping until we become a net exporter in energy.”

"We will remove the current account deficit from the agenda of our country," Treasury and Finance Minister Berat Albayrak said, speaking from aboard the Fatih drillship.

“This discovery, even if do not find any new source, will meet the needs of our country for about 7-8 years, but of course the explorations will continue and perhaps this figure will increase even more,” Dönmez said, pointing to the fact that Turkey’s annual natural gas consumption came to around 45-50 billion cubic meters.

The gas find is located in waters 2,100 meters deep, Dönmez explained, with drilling extending another 1,400 meters below the sea bed. “We will go down a further 1,000 meters ... and data shows we will probably find gas there too.”

The discovery is expected to draw the attention of international energy companies to the Black Sea, paving the way for Turkey's future discoveries.

Turkey has striven to increase domestic gas production as the country is 99% dependent on imports both via pipelines and liquified natural gas (LNG). The majority of the imports come from Russia, while Azerbaijan and Iran also have a significant share in total gas imports.

Due to increasing investment levels in LNG infrastructure, Turkey has achieved a rising share of LNG in its mix with LNG cargoes from major destinations including the U.S., Norway, Qatar, Algeria.

Higher prices for gas imports have driven the country's deficit to higher levels than desirable since it is totally dependent on imports of natural gas for its consumption.

Turkey paid over $20 billion for its gas imports in 2014 when the price of oil stood at around $120 per barrel. The country's gas import bill retreated to levels of between $10-15 billion in the following years.

A possible 10 bcm of gas per annum is forecast to decrease the country's trade deficit by around $3 billion annually.

The reserve is almost 20 times larger than Turkey's domestic aggregate gas production, which has reached 16.6 bcm. Turkey's annual gas production was 473,8 million cubic meters in 2019 – an amount produced both by the Turkish Petroleum Company and other domestic and international companies.

The discovery of the 320 bcm of gas reserves came after extensive research in the area conducted by the Barbaros Hayrettin Paşa and MTA Oruç Reis seismic vessels over the last two years.

The government plans to launch procurement from the field by 2023.

The amount of investment in the Sakarya Gas Field will be determined depending on the geological structure of the location as well as the number of the wells and technology to be used.

Therefore, it is hard to estimate the exact amount of investment needed, since the discovery could be a part of a larger set of reserves in the area.