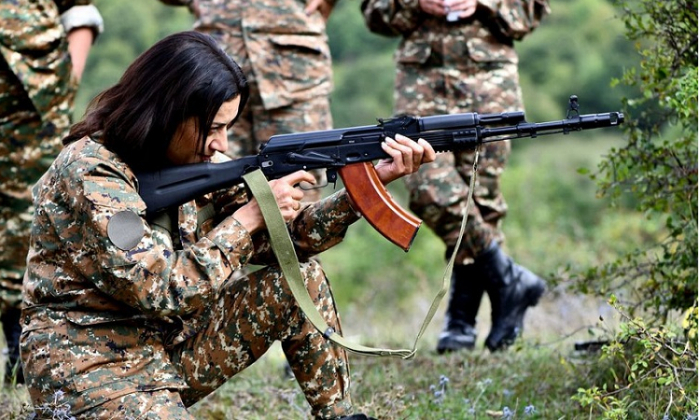 The “Ana Veten” (Motherland) Union of Azerbaijani women of Europe has expressed a protest against the participation of Anna Hakobyan, wife of the Armenian prime minister, in illegal military exercises in the occupied Azerbaijani territories of Nagorno-Karabakh region, as well as the dissemination of photographs in which she aims from a machine gun at the Azerbaijani trenches, the Azerbaijani State Committee on Work with Diaspora told AzVision.az.

The issue that Armenia has been holding the Azerbaijani territories of Nagorno-Karabakh region and adjacent districts under occupation for 30 years and the fact that international organizations and the leading countries recognize this, was stressed in the statement addressed to the international community and signed by the Chairperson of the Union, Maisa Agamirzoyeva.

“Yerevan ignores the demands of the world community to withdraw its armed forces from the occupied territories as well as stop provocations on the line of contact and the state border with Azerbaijan, which is trying to resolve the conflict [Armenia-Azerbaijan Nagorno-Karabakh conflict] peacefully,” the statement said. “During the July clashes, the whole world witnessed Armenia's aggression.”

Following the statement, to conceal the fact that the provocation in the direction of Azerbaijan’s Tovuz district was initiated by the government headed by her husband, disguised as peacefulness, Hakobyan appealed to Azerbaijani mothers.

“The recent photos of Hakobyan, who in 2018, declaring herself to be the defender of peace in the region, invited Azerbaijani women to join the campaign "Women for Peace", her call to the Armenian women to defend the occupied territory of the neighboring country with arms in her hand testifies Armenia's hypocritical foreign policy,” the statement said. “If women in Armenia are already preparing for war, what is the point of this country's peace-loving statements?!”

The Union said that despite the recent calm on the Azerbaijani-Armenian border and the contact line, worrisome moments persist and the messages on social networks and world media only increase this concern.

While demanding the settlement of the Nagorno-Karabakh conflict within the territorial integrity and internationally recognized borders of Azerbaijan, the Union stated that Armenia must stop the attacks on civilians in Azerbaijan and immediately withdraw its armed forces from the occupied Azerbaijani territories under the decisions of the UN Security Council and OSCE. 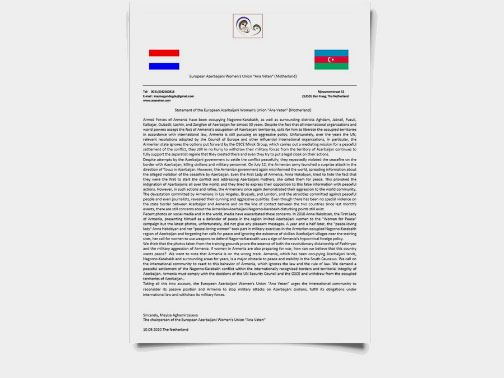