Prosecutor General of the Republic of Azerbaijan issued a statement 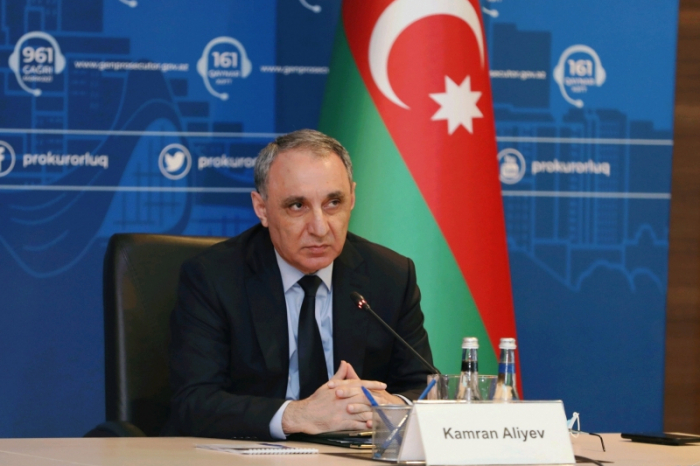 Prosecutor General of the Republic of Azerbaijan Kamran Aliyev has issued a statement regarding shelling of Azerbaijan's Ganja city from the Armenian territory, AzVision.az reports.

"As reported earlier, the aggression launched by the Republic of Armenia against the Republic of Azerbaijan since September 27 still continues. Important settlements and strategic heights have been liberated by the Azerbaijani Army with appropriate responses. In response, with the instructions of the so-called "President of the Nagorno-Karabakh Republic" Arayik Harutyunyan, the second biggest city of Azerbaijan, Ganja was fired with rocket and artillery shells from the territory of Armenia on October 4, at around 10:00.

According to the information, Ganja resident, Aliyev Tunar Goshgar oglu was killed and 32 people were injured. Besides, the city's infrastructure and houses were severely damaged. The amount of damage is being determined by the operational-investigations group of the Prosecutor General's Office operating at the scene and carrying out other necessary investigative actions.

According to the preliminary investigation, there is enough evidence that the so-called "President of the Nagorno-Karabakh Republic" Arayik Harutyunyan directly violated the requirements of the Geneva Convention, deliberately killed civilians and committed actions to spread panic among people.

I hereby declare that necessary measures are being taken to prosecute the "President of the Nagorno-Karabakh Republic" Arayik Harutyunyan and other military-political leaders of this illegal organization for crimes against peace and humanity, including war crimes. It will be ensured to apply to all international organizations in this regard.

I again declare that Armenia must immediately stop provocative crimes including shelling the non-combat settlements, cities, as well as civil infrastructure facilities".