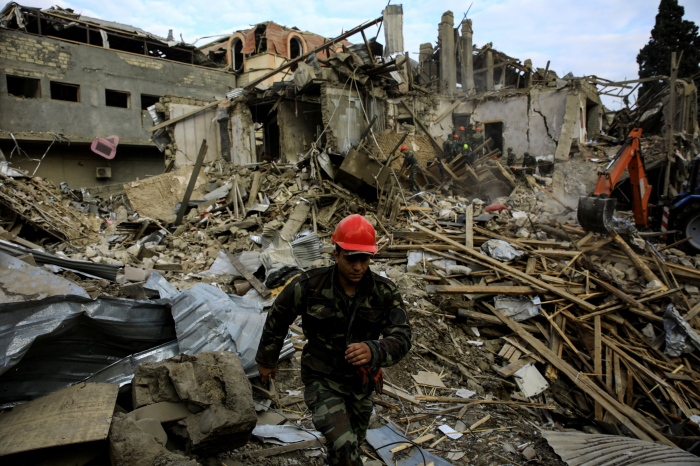 Despite the humanitarian cease-fire agreed during the meeting of the Foreign Ministers of the Republic of Azerbaijan and Armenia in Moscow with the mediation of the Russian Federation, with the purpose of exchange of prisoners of war and bodies of dead effective as of 12:00 pm on October 10, 2020, the armed forces of Armenia continue to attack the residential areas and civilian infrastructure.

Immediately after the establishment of the humanitarian ceasefire, the armed forces of Armenia fired on Aghdam and Tartar regions of Azerbaijan.

A few hours later, armed forces of Armenia tried to attack in the direction of Hadrut and Jabrayil.

The Armenian side subjected to missile attack the city of Minghachevir, located 40 km away from the front line, which also hosts the largest water reservoir in the South Caucasus.

A medical worker was seriously injured as a result of the shooting by the armed forces of Armenia of a sanitary medical vehicle, clearly marked with a white flag, collecting the bodies of Armenian soldiers in the area of Sugovshan.

On the night of October 11, an apartment building in the central part of Ganja, the second-largest city in Azerbaijan, located approximately 40 km far from the frontline, came under the missile attack by the armed forces of Armenia. The missile hitting the apartment building ruined it fully, and its residents remained under rubble. According to the preliminary information, 9 civilians including 4 women were killed and 34 others, including 16 women and minors were severely injured. In addition, 10 apartment buildings and more than 100 various facilities were extensively damaged. It should be mentioned that the missile strike on Ganja was conducted from the Vardenis region of Armenia.

Deliberate strikes by the armed forces of Armenia on densely populated Ganja city since October 4, 2020, have already led to killing of 10 (see Annex 1) and injury of 71 civilians.

Deliberately and systematically targeting the civilian settlements and objects as well as infrastructure of vital importance by the armed forces of Armenia is a gross violation of International Humanitarian Law, including the Geneva Conventions of 1949 and constitutes a war crime.