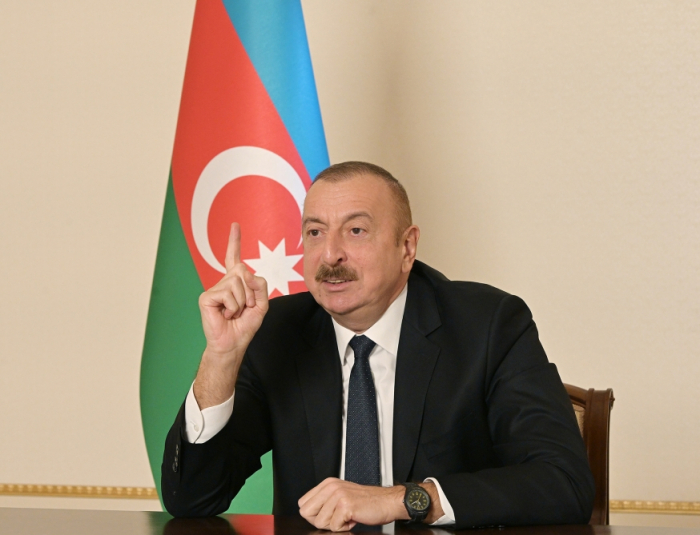 Preliminary instructions have already been given in connection with the restoration of the railway to the Nakhchivan Autonomous Republic [of Azerbaijan], President of the Republic of Azerbaijan Ilham Aliyev said addressing the nation, AzVision.az reports.

“We will revive these cities and districts. We have major plans on the restoration of these lands. These plans are already being implemented, infrastructure projects are being implemented. The construction of a new road to Shusha has already begun. In Soviet times, there was one road Shusha – from Aghdam to Khankandi and from there to Shusha. We are now building a new road from Fuzuli district. This road will pass through a part of Khojavand district," he said.

"I have ordered to do this as soon as possible. However, this is a huge task, there was no road there before and a new road is being built through forests. There are ravines, hills and the terrain is very difficult. But we will do it. We will restore the railways. In particular, preliminary instructions have already been given in connection with the restoration of the railway to the Nakhchivan Autonomous Republic. Tangible steps have already been taken to restore the Barda-Aghdam railway. This road is a must for the restoration of Aghdam district and for the comfort of the people who will live there in the future. So all this work will be carried out in a planned manner and the people of Azerbaijan will be regularly updated about the work to be done. We must do all the work in a planned manner," he noted.

"I want to say again: first of all, all the damage will be calculated with the participation of international experts. Then lawsuits will be filed. Then comes the reconstruction of our cities and villages on the basis of master plans. The necessary measures related to agriculture, other infrastructure projects, water and electricity will be taken. Then come roads. When we drove the enemy out of Shusha, it destroyed the water line feeding the city. There is no water in Shusha now. This is what the enemy is like,” the head of state said.