Russia braces for new protests against jailing of Navalny 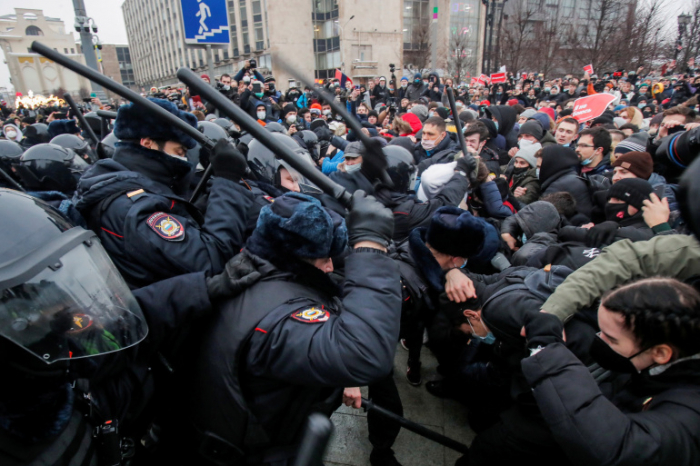 Supporters of jailed Alexei Navalny were set to stage fresh protests in Moscow and across Russia on Sunday for a second straight weekend despite a sweeping crackdown on his allies and the near-certainty of a confrontation with police, Reuters reported.

The rallies are part of a campaign to win the release of President Vladimir Putin’s opponent, who was arrested on Jan. 17 after returning from Germany. He had been recovering there from a nerve agent poisoning in Russia.

The 44-year-old opposition politician accuses Putin of ordering his murder, which the Kremlin denies.

Navalny is accused of parole violations which he says are trumped up. A court is due to meet next week to consider handing him a jail term of up to three and a half years.

The protests following Navalny’s dramatic return to Moscow. Polls show pent-up frustrations among Russians over years of falling wages and fallout from the pandemic.

The West has told Moscow to let Navalny go and his allies have appealed to U.S. President Joe Biden to sanction 35 people who they say are Putin’s close allies.

To galvanise support at home in an online video viewed over 100 million times, Navalny has accused Putin of being the ultimate owner of a sumptuous Black Sea palace, something the Kremlin leader has denied.

On the eve of the protests, Arkady Rotenberg, a businessman and Putin’s former judo sparring partner, said he owns the property.

Police have warned that Sunday’s protests have not been authorised and will be considered illegal and broken up as they were last weekend. They have also said demonstrators could spread COVID-19.

Officers detained more than 4,000 people at last Saturday’s rallies, according to a protest monitoring group. Protesters in one city turned out in temperatures of -52 degrees Celsius.

In Moscow, police appeared to struggle to find enough jail space. One protester said authorities only found him a cell late on Wednesday after arresting him on Saturday.

This weekend, Navalny’s supporters in Moscow plan to gather near the Kremlin administration and the headquarters of the FSB, the KGB’s successor, where protesters in 1991 famously toppled a statue of the secret police’s founder during the Soviet breakup.

Police said on Friday they would close seven metro stations and restrict pedestrian movement in the area due to the protest plans.

Many of Navalny’s prominent allies were targeted in a crackdown this week. Several, including his brother Oleg, are under house arrest.