Azerbaijanis in Ukraine make appeal on recognition of Khojaly genocide 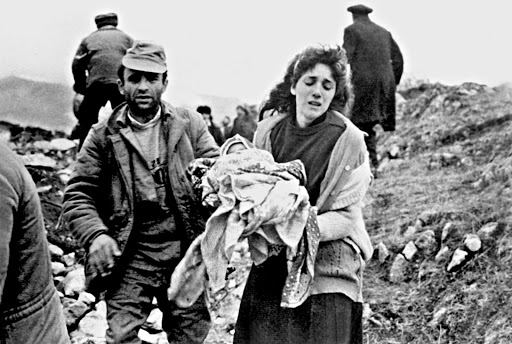 “One of the tragic moments was the night from 25 to 26 February 1992, when Armenian military units attacked the Azerbaijani city of Khojaly, as a result of which 613 civilians were killed, including 63 children and 106 women, 487 people were mutilated, 150 people went missing, 1,275 residents, mostly elderly people, children, and women were captured, where they were subjected to terrible bullying, torture and abuse, and the city with a population of more than 7,000 people was destroyed,” the appeal reads.

The authors of the appeal emphasized that the nature and scale of crimes against the population of the city of Khojaly clearly fall under the Convention on the Prevention and Punishment of the Crime of Genocide, adopted by Resolution 260 of the UN General Assembly dated December 9, 1948, where the legal grounds for recognizing genocide are enshrined.

The Parliament of Azerbaijan appealed to the UN, the Organization for Security and Cooperation in Europe, the Council of Europe, the Parliamentary Assembly of the Council of Europe, and other international organizations with a request to recognize the above crimes committed by Armenian chauvinists and separatists as genocide of Azerbaijanis, reads the appeal.

To date, the legislative bodies of many countries, including the Organization of Islamic Cooperation, have adopted parliamentary acts on the recognition of the Khojaly genocide, the document said.

Taking this into account, the authors of the appeal asked that the resolution on condemning the events of February 26, 1992, in Khojaly city of Azerbaijan and recognizing these events as genocide of the Azerbaijani population be put to a vote at the plenary session of the Verkhovna Rada of Ukraine.