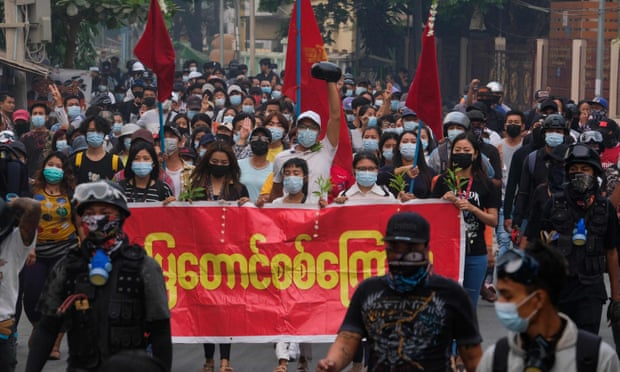 The number of protesters killed in Myanmar since February’s military coup has surpassed 320, according to the country’s Assistance Association for Political Prisoners, which said its total only included documented cases and that the real number was likely to be much higher.

“We cannot pick up the [third] dead body as many security forces are there,” the witness told Reuters, adding that several other people were wounded.

Almost 3,000 people have also been arrested, charged or sentenced in the crackdown since the 1 February coup that ousted the elected government. Most, including its leader, Aung San Suu Kyi, and the country’s president, Win Myint, remain detained.

The continuing violence came as about 300 prisoners arrested for protesting against the coup were freed on Friday, a witness and domestic media said.

Six buses full of passengers drove out of Insein prison in Yangon, a witness and ElevenMyanmar media reported.

Protests continued to take place across the country overnight and on Friday, including in the Mandalay and Sagaing regions and Karen and Chin states, media reports said.

A group of about 100 people beating drums held a protest in the central Sule area of Yangon before the security forces chased them away, witnesses said.

The army’s seizure of power halted Myanmar’s move toward democracy that began when Aung San Suu Kyi’s party took office in 2016 for its first term after more than five decades of military rule.

The movement opposed to the junta and its takeover received a major boost on Thursday when the US and Britain announced tough sanctions against two military-owned conglomerates.

Both are part of a military-controlled network that spans sectors from mining to tourism and has enriched the generals. Representatives for the two entities had no immediate comment.

In a move coordinated with Washington, Britain – the former colonial power – said it would also target Myanmar Economic Holdings, citing human rights violations against civilians and its association with senior military figures.

Washington said its action targeted the army’s control of large parts of the country’s economy, “which is a vital financial lifeline for the military junta”.

The sanctions against the two companies and their holdings block access to any property they control in the US and effectively bars US individuals of companies from conducting any business with them.

Myanmar’s homegrown Civil Disobedience Movement is also targeting the economy in order to make it difficult for the junta to govern. It has advocated public sector strikes, bank closures and divestment by foreign companies.

The World Bank cut its forecast for the country’s economy to a 10% contraction in 2021 from the growth previously expected.