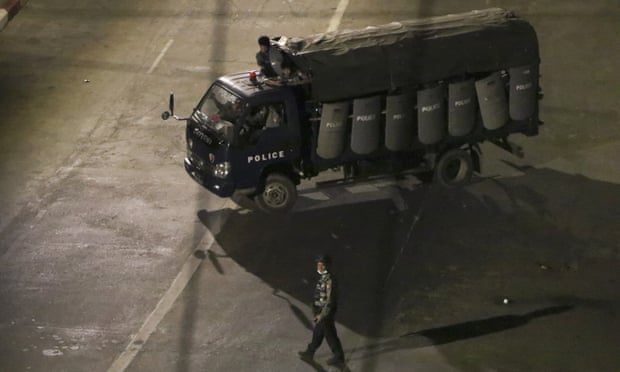 Myanmar’s military junta has expanded an internet shutdown, further stifling access to information in the country, where hundreds of people have been killed and disappeared following a coup in February, AzVision.az reports citing the Guardian.

On Thursday night, ahead of the new restrictions, people rushed to share links to radio channels and communication apps that function offline. On the streets, protesters held a vigil, using candles to spell the words “We will never surrender”.

Access to the internet had already been severely restricted by the junta. Mobile data, which is the main source of internet access, has been cut for 18 days across the country, while a wider shutdown has been imposed every night for almost 50 days. The new cuts affect wireless broadband, though fibre services still appear to be working.

On Thursday, the UN Security Council “expressed deep concern at the rapidly deteriorating situation” in Myanmar. In a statement, it said it “strongly condemned the use of violence against peaceful protestors and the deaths of hundreds of civilians, including women and children.”

At least 535 people have been killed by the military since the coup, according to the Association for Political Prisoners (AAPP), while more than 2,500 people who have been detained. The advocacy group has been unable to confirm the location of the vast majority of recent detainees.

On Thursday, prior to the imposition of new internet restrictions, protesters called for a “flower strike” at bus stops where demonstrators killed by security forces had departed on their last journeys. “We will leave flowers at bus stops tomorrow ... That’s what I want to tell you guys before the internet is down,” Khin Sadar, a protest leader, posted on Facebook.

At protesters earlier in the day, fatalities rose further. According to reports by AFP, a 31-year-old protester was shot dead, and 10 others were wounded, in Monywa in central Myanmar, while one person was also killed, and six injured, in Mandalay.

British foreign minister, Dominic Raab, accused the military of “the wanton killing of innocent people, including children”, announcing sanctions against one of the military’s biggest conglomerates, Myanmar Economic Corporation (MEC). The UK also said it would contribute $700,000 towards UN security council efforts to document serious human rights violations in Myanmar.

The International Federation of Red Cross and Red Crescent Societies has called for greater protection for medical workers, warning that Myanmar Red Cross first aiders have been “wrongfully arrested, intimidated or injured”, and that Red Cross property and ambulances had been damaged.

“This is unacceptable. Health workers should never be a target. They should be granted unrestricted humanitarian access to people in need,” said Alexander Matheou, the IFRC’s Asia Pacific regional director.