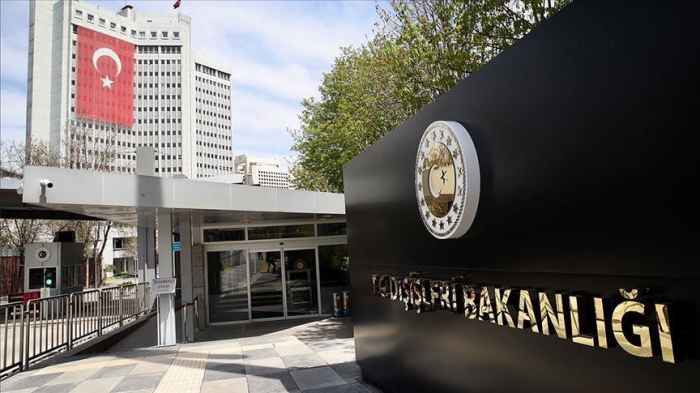 According to a statement, the ambassador was told that Italian Prime Minister Mario Draghi's remarks were against the spirit of the Turkey-Italy alliance.

The ministry stressed Draghi should "immediately" take back his "impudent and ugly remarks."

Faruk Kaymakci, Turkish deputy foreign minister and director of EU affairs, conveyed to the Italian ambassador that Turkey strongly condemned the remarks by the "appointed" Italian premier on President Recep Tayyip Erdogan, a leader who was elected with the highest popular vote in Europe.

Draghi, at a news conference earlier on Thursday, called Erdogan a "dictator."

"I totally disagree with Erdogan's behavior. I believe that it wasn't appropriate behavior. I was really sorry for the humiliation that [European Commission President Ursula] von der Leyen had to suffer," the Italian premier said, referring to a seating issue at a top EU officials' meeting in Turkey.

"Here the consideration we have to make is that with these -- let's call them what they are -- dictators, who however we need to cooperate, is that we must be frank in expressing our diverging views, behavior and vision of society, but we also need to be ready to cooperate to ensure the interests of our country. We need to find the right balance," he added.

"While EU Council President Michel explained that there was no problem or intention resulting from Turkey regarding the protocol design, Italy's appointed Prime Minister Draghi's remarks directed at our President are impudent and baseless. We condemn this expression and expect it to be corrected," Turkey's presidential spokesman Ibrahim Kalin said.

Noting that Erdogan was "elected President by the Turkish people with 52%", Altun said, "We strongly condemn this style which has no place in diplomacy."

"Those looking for the dictator should look at the history of Italy," he continued.

Vice President Fuat Oktay also took to Twitter to condemn the Italian premier's remarks and called on him to apologize.

"I condemn the impudent and indecent statements by Prime Minister Draghi about our President, who has considered the interests of his country and nation throughout his life, objected to any sort of fascism and tutelage and won every election with the high trust of the public," Oktay said.

There was criticism in some circles on the seating arrangement at Tuesday's meeting, where the Turkish President and the EU Council head Charles Michel sat down in separate chairs while von der Leyen was initially left standing.

She was then offered a seat on a couch, with Cavusoglu also sitting down on a separate couch opposite her.

Speaking to reporters early Thursday, Cavusoglu downplayed the brief confusion over the seating arrangements, saying that Turkey had satisfied all the protocol requirements of the EU side.