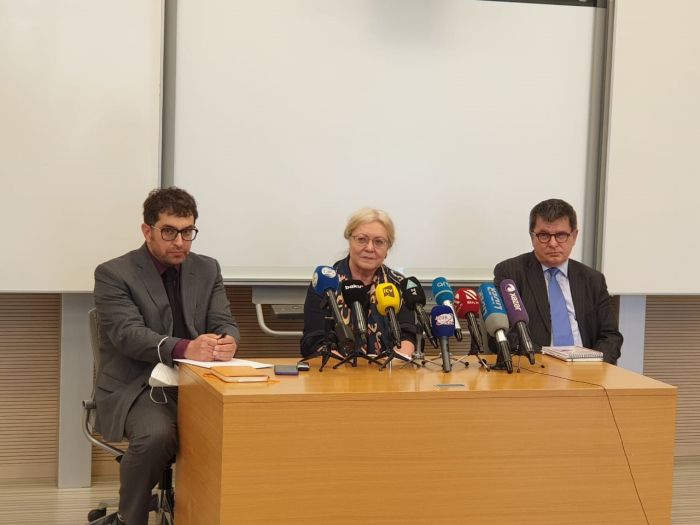 The accusations made against Azerbaijan in the West in the face of the Second Karabakh war show the ignorance of the essence of the issue and distorted view of the Nagorno-Karabakh conflict in many European countries, where the influence of the Armenian lobby is strong.

These remarks can be drawn from German historian Ida Maria Aux’s interview to journalists, who is on a visit to Baku.

"Indeed only those, who are unaware of the essence of the conflict can accuse Azerbaijan of aggression. As historians, referring to documents we are able to prove that Azerbaijan has been waiting for the liberation of its lands for a long time and acted within the international law," German historian said at a meeting with journalists on April 11.

According to German professor, it is significant to realize specific projects, particularly publishing a collection of documents in different languages in order to show the legitimacy of Azerbaijan's actions and explain the essence of the Nagorno-Karabakh conflict.

Professor Ida Maria Aux is from a group of scientists and researchers, who are in Azerbaijan to learn the post-conflict situation and get first-hand information.

German professor said that it was very difficult to convey reliable information about the conflict to the German public due to the large number of fake news and propaganda activities of members of the Armenian lobby during the war in Karabakh in the fall of 2020.

"Armenian diaspora has been living in Germany for centuries and they have deeply integrated into society. When it comes to Armenia’s national interests, they immediately stop being citizens of Germany, France, Belgium and become Armenians, they start to act differently, " the professor said.

In German historian’s view, biased perception of the Karabakh issue prevails in the West because of this key factor.

She believes that currently Armenia and Azerbaijan are in a post-conflict period in terms of establishment of economy and infrastructure, it is also important to pay attention to the process of rapprochement of people.

Therefore, German historian plans to start a peace project, which is called "Women's Dialogue" soon. She believes that most women are more committed to peace.