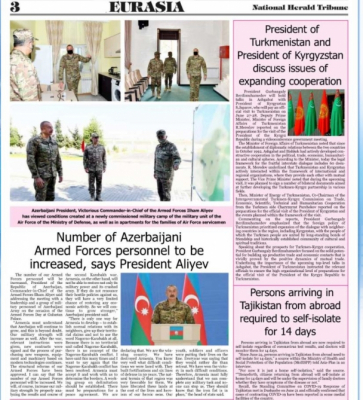 Pakistan's English-language newspaper “National Herald Tribune” has published an article highlighting President Ilham Aliyev’s remarks during his visit with leadership and a group of military personnel of the Azerbaijani Army on Armed Forces Day.

The article quotes President Ilham Aliyev as saying during the meeting: “The number of our Armed Forces personnel will be President Ilham Aliyev said: Armenia must understand that Azerbaijan will continue to grow, and this is beyond doubt. Our military strength will increase as well. After the war, relevant instructions were given, new contracts were signed and the process of purchasing new weapons, equipment and machinery based on modern technologies continues. The structural reforms of our Armed Forces have been approved. I can say that the number of our Armed Forces personnel will be increased. We will, of course, increase our military strength by properly analyzing the results and course of the second Karabakh war. Armenia, on the other hand, will not be able to restore not only its military power and its crushed army. If they do not renounce their hostile policies against us, they will have a very limited chance of restoring any economic activity. So we will continue to grow stronger.”

“There is only one way for Armenia to develop – to establish normal relations with its neighbors, give up their territorial claims and not to use the word Nagorno-Karabakh at all. Because there is no territorial unit called Nagorno-Karabakh, there is no concept of the Nagorno-Karabakh conflict. I have said this many times and I want to say again that the Nagorno-Karabakh conflict has been resolved. Armenia must accept it and work with us to determine the borders. A working group on delimitation should be established. There must be preparations for a peace agreement. We are declaring that. We are the winning country. We have destroyed Armenia. You know very well what difficult conditions we were faced with. They built fortifications and six lines of defense in 30 years. The natural terrain of that region was very favorable for them. We have liberated these lands at the cost of the lives and heroism of our heroic sons. Our youth, soldiers and officers were putting their lives on the line. Everyone was saying that they would rather die than retreat. We have won the victory in such difficult conditions. Therefore, Armenia must fully understand that we can complete any military task and no-one can stop us. They should know that the iron fist is in place,” the head of state emphasized.