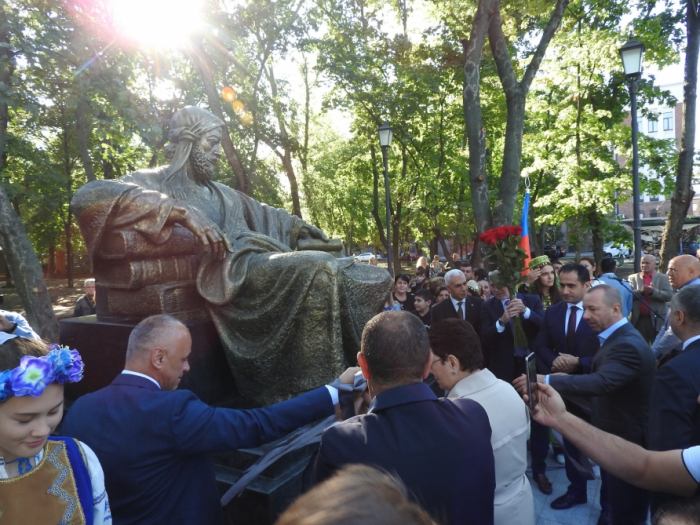 A monument to the great Azerbaijani poet and thinker Nizami Ganjavi has been unveiled in Kharkiv, the second largest city of Ukraine.

The monument was erected under the Order of President Ilham Aliyev declaring 2021 as a Year of Nizami Ganjavi in Azerbaijan.

Supported by Azerbaijani Embassy in Ukraine, Kharkiv City Council and Azerbaijan’s Honorary Consulate in Kharkiv, the statue’s unveiling ceremony was held at the city center.

Describing Nizami Ganjavi as a person whose name has been written with golden letters in the world history, Ihor Terekhov noted that the opening of the monument is a remarkable event not only for the city itself, but for the whole Ukraine.

Azerbaijan’s Deputy Minister of Culture Elnur Aliyev noted that the monument to Nizami Ganjavi in Kharkiv, the second largest city of Ukraine that used to be a capital of the country, is of great importance to Azerbaijani community and local residents, stressing a strong presence of Azerbaijani diaspora in the city.

Ambassador Elmira Akhundova emphasized that the monument was a clear example of trustworthy relations between the two countries, saying that monuments to Nizami have been erected in many cities of the world.

The author of the monument, People’s Artist of Ukraine Katib Mammadov expressed gratitude to Azerbaijani Embassy in the country, Azerbaijan's Honorary Consulate in Kharkiv, as well as Kharkiv City Council.

The event then featured a concert in Kharkiv Regional Philharmonic hall.