Ombudsperson issues statement on March 31- Day of Genocide of Azerbaijanis 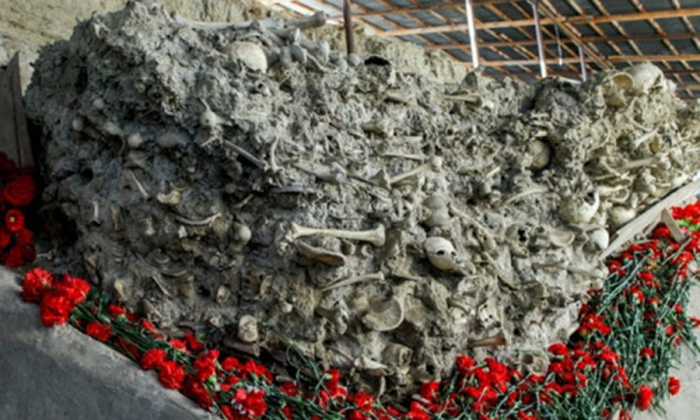 Azerbaijani Human Rights Commissioner (Ombudsperson) has issued a statement on the occasion of March 31- Day of Genocide of Azerbaijanis, AzVision.az reports.

The statement reads: "Armenian nationalists living with the dream of establishing a "Greater Armenia" state have purposefully pursued a policy of genocide, ethnic cleansing and deportation of the Azerbaijani people throughout history. Thus, our nation has suffered severe deprivations and tragedies. The most horrific manifestation of this policy is the act of genocide committed starting from March 1918.

As a result of this act of genocide, tens of thousands of civilians were killed in Baku, other cities and provinces of Baku Governorate, as well as in Shamakhi, Guba provinces, Karabakh, Zangazur, Nakhchivan, Lankaran and other regions of Azerbaijan due to their ethnic and religious background. Furthermore, settlements, cultural monuments, mosques and other places of worship, cemeteries were destroyed. 110 villages of Shamakhi, 167 villages of Guba, more than 150 villages of Karabakh, 115 villages of Zangazur, and 98 villages of Kars were destroyed, burned and their inhabitants were killed.

Over  50,000 Azerbaijanis, including women, children and the elderly, were killed as a result of bloody crimes committed by Armenian armed groups in Baku, Shamakhi, Guba, Mugan, Lankaran and Goychay cities and districts between March and July of 1918. Furthermore, 199 villages were destroyed in and around the historical territory of Azerbaijan- Iravan city, as a result of which 132,000 Azerbaijanis were killed.

Despite the fact that more than a century has passed since this genocide, those bloody events have not been forgotten and have left indelible marks on the blood memory of our nation. The Presidental Decree "On the Genocide of Azerbaijanis" signed by National Leader Heydar Aliyev on March 26, 1998, was an important step in revealing the historical truth. Consequently, these horrific events were given a political assessment, and 31 March  was declared the "Day of the Genocide of Azerbaijanis."

As a result of the investigation, the facts of mass exterminations committed by Armenians during the events of 1918, countless human bones and other material evidence were revealed. The "Genocide Memorial Complex" was established in Guba city by the appropriate Order of the President of the Republic of Azerbaijan Mr. Ilham Aliyev in order to convey these truths to the world community and to memorize the genocide victims. Every year, thousands of people visit this place to commemorate the memory of our murdered compatriots.

According to international law, genocide is considered the most serious crime against peace and humanity. Unfortunately, despite the fact that there is enough evidence and proof about the acts of genocide committed by Armenians against Azerbaijanis, there has been no adequate response to these crimes against humanity, and double standards have been demonstrated in respect of Azerbaijan. In this regard, the Resolution of 10 March 2022, adopted by the European Parliament on the alleged destruction of the Armenian cultural heritage in Karabakh once again demonstrated double standards and biased policy against our country. During the last 30 years of occupation, Armenia, which has committed numerous crimes against the civilian population, purposefully and systematically destroyed all Azerbaijani historical, cultural, religious monuments, archeological sites, libraries, museums, artifacts, rare manuscripts and cemeteries. Despite the repeated calls from the Azerbaijani side during these years, no fact-finding mission has been established by relevant international organizations to investigate these issues on the spot.

The failure to respond to ethnic cleansing and genocide committed by Armenia against the Azerbaijani people for many years, along with acts of vandalism against our cultural heritage, is a clear example of discrimination and indifference to states and contradicts the principles of international humanitarian law.

International organizations should take into account that, unlike mono-ethnic Armenia, Azerbaijan, as a state following the principles of tolerance and values of multiculturalism, is taking all necessary steps to ensure peace, stability and security in the South Caucasus, and to restore the peaceful coexistence of nations.

I believe that international organizations and the world community must demonstrate a fair and transparent approach with regard to the investigation into crimes against civilians, and the facts and evidence-based cases of destruction of cultural heritage belonging to Azerbaijanis.

I once again remember the victims of the genocide against Azerbaijanis with deep sorrow and call on the world community and international organizations to give the necessary political and legal assessment of this act of genocide in order to protect human rights and prevent the recurrence of such cases in the future."

This Statement is addressed to the UN Secretary-General, UN Security Council, UN Office of High Commissioner for Human Rights, UN Office of High Commissioner for Refugees, UN Human Rights Council, the United Nations Children’s Fund, the United Nations Educational, Scientific and Cultural Organization, European Union, Council of Europe, Organization for Security and Co-operation in Europe, International and European Ombudsman Institutions, Asian Ombudsman Association, Organization of Islamic Cooperation and the Ombudsman Association of its member states,  Independent Permanent Human Rights Commission of the Organization of Islamic Cooperation, European Network of Ombudspersons for Children, International Peace Bureau, different ombudsmen and national human rights institutions, embassies of the Republic of Azerbaijan in foreign countries and the foreign embassies in Azerbaijan,  as well as to the Azerbaijani Diasporas.