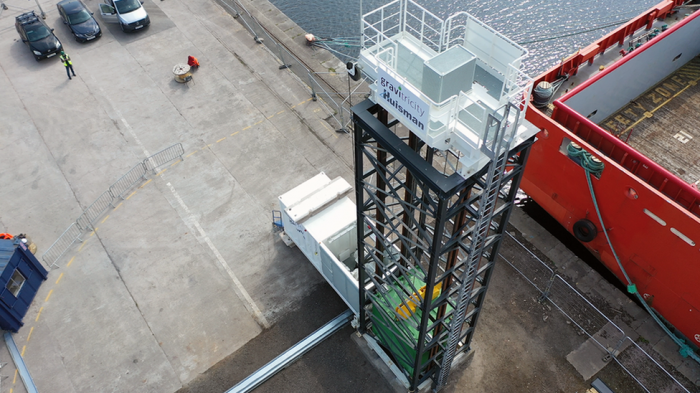 Could a cutting-edge technology that harnesses one of the universe's fundamental forces help solve our energy storage challenge?

There is a riddle at the heart of the renewable energy revolution. When the wind blows, the sun shines, and the waves roll, there is abundant green power to be generated. But when skies darken and conditions are calm, what do we do?

The answer, today, is to ramp up conventional power production, supplying the grid by burning fossil fuels. It is a 20th Century solution to a 21st Century problem – one that sits in sharp contrast with plans for carbon neutrality.

A cleaner future will mean focusing on ever-larger lithium-ion batteries, some energy experts say. Others argue that green hydrogen is the world's best hope. And then there are those placing their bets not on chemistry, but the limitless force that surrounds us all: gravity.

Underpinned by Newton's immutable logic – what goes up, must come down – this new field of energy storage technology is, in principle, remarkably simple. When green energy is plentiful, use it to haul a colossal weight to a predetermined height. When renewables are limited, release the load, powering a generator with the downward gravitational pull.

A similar approach, "pumped hydro", accounts for more than 90% of the globe's current high capacity energy storage. Funnel water uphill using surplus power and then, when needed, channel it down through hydroelectric generators. It's a tried-and-tested system. But there are significant issues around scalability. Hydro projects are big and expensive with prohibitive capital costs, and they have exacting geographical requirements – vertiginous terrain and an abundance of water. If the world is to reach net-zero, it needs an energy storage system that can be situated almost anywhere, and at scale.

Gravitricity, an Edinburgh-based green engineering start-up, is working to make this a reality. In April last year, the group successfully trialled its first gravity battery prototype: a 15m (49ft) steel tower suspending a 50 tonne iron weight. Inch-by-inch, electric motors hoisted the massive metal box skyward before gradually releasing it back to earth, powering a series of electric generators with the downward drag.

The demonstrator installation was "small scale", says Jill Macpherson, Gravitricity’s senior test and simulation engineer, but still produced 250kW of instantaneous power, enough to briefly sustain around 750 homes. Equally encouraging was what the team learned about their system’s potential longevity.

"We proved that we can control the system to extend the lifetime of certain mechanical components, like the lifting cable," says Macpherson. "The system is also designed so that individual components can be easily replaced instead of replacing the entire system throughout its lifetime. So there's real scope for having a decades-long operational life."

While the Gravitricity prototype pointed upward, the company's focus is now below ground. Engineers have spent the last year scoping out decommissioned coal mines in Britain, Eastern Europe, South Africa, and Chile. The rationale, explains managing director Charlie Blair, is pretty straightforward: "Why build towers when we can use the geology of the earth to hold up our weights?"

It seems like a neat solution. The globe is pockmarked with disused mine shafts deep enough to house a full-sized Gravitricity installation, which will stretch down at least 300m (984ft), and possibly much further. There's political will to make it happen too, Blair says, with policymakers keen to tap into public enthusiasm for a so-called "just transition" – the notion of a new, low-carbon economy that secures the livelihoods of fossil fuel workers and their communities. And so, with enough funding, a subterranean prototype (most likely located in the Czech Republic) should be functioning by 2024. First, though, a series of challenges must be overcome.

"We need to look closely at the existing civil structures – the shaft lining, the shaft’s surroundings – and make sure they're absolutely sound and capable of holding up several thousand tonnes," Blair explains. "There are also potential safety issues around methane gas, and the mines being flooded."

With that in mind, Gravitricity is also looking at sinking its own purpose-built shafts: an endeavour that'll cost more upfront, but promises far greater uniformity further down the line.

Not all innovators see the merits of a below-the-surface solution, however. In a valley in southern Switzerland, the striking steel and concrete prototype from Energy Vault, another leader in the gravity battery space, stands more than 20 stories tall. When green power supply exceeds demand, one of several AI-controlled cranes lifts a pair of 30-tonne blocks upwards. When demand outstrips supply, back down they go, generating enough energy for thousands of homes.

With its technology tried and tested – and having received some $402m (£325m) worth of investment – Energy Vault is ready to start a commercial rollout. For that, the company has designed something a little more aesthetically pleasing than the angular Swiss prototype: a modular building dubbed "EVx" that stores thousands of weights on a trolley system.

"Think of it as a warehouse of energy elevators," says Robert Piconi, Energy Vault's CEO. "When clean electricity is coming in, the blocks – made of recycled material – go up, and when the grid needs supply, they go back down. An EVx with a storage capacity of 100MWh can power around 25,000 homes for a day."

Each installation's size and layout will determine its overall storage capacity, but even at the lower end, the buildings will cover dozens of acres. Could this be problematic? No, Piconi says, as the systems are likely to be situated near wind and solar farms far from urban centres.

"We won’t have to dig any deep holes either, or have any other big limiting factors on location. Basically anywhere you can construct a 20-storey building will work," he says.

It's a message that seems to be resonating: Energy Vault's order book is filling up fast, with interest coming in from across Europe, America, the Middle East, Australia, and China. The latter is particularly exciting, says Piconi, who is hopeful that it could signify a change of direction for the world's largest emitter of greenhouse gases.

That may be wishful thinking, but sooner or later, all countries will have to embrace some form of green energy storage. This includes long duration storage, keeping the lights off for an extended period of time when renewable generation is low, and short bursts of electricity as and when the grid requires additional supply.

"At all times, the grid needs to be balanced," explains Thomas Morstyn, an electrical engineering expert at the University of Edinburgh. "Operators constantly have to match supply and demand, but that's tricky when you've got something as inherently intermittent as wind or solar, which are susceptible to sudden variations."

The sheer mass of a gravity battery's weight coupled with its incredibly slow descent generates a huge amount of torque, allowing the system to deliver maximum power almost instantaneously. This makes the technology particularly adept at maintaining grid equilibrium, reducing the risk of serious infrastructural damage and blackouts by ironing out second-by-second fluctuations.

Lithium-ion batteries, the type that power our phones, laptops, and electric vehicles, can ramp up equally quickly, however, and have similar round-trip efficiency figures as gravity solutions. The cost of lithium cells has dropped significantly in recent years as well. So why not simply build ever bigger chemical batteries?

In answering this question, it's important not only to consider the upfront expenditure, but the total lifetime cost of a system. Gravity batteries are mechanical contraptions, and as such, they can break. Maybe a cable snaps, or a gearbox jams, or a patch of rust appears. These issues are problematic, but they're not fatal – individual components can be replaced with relative ease. This "repairability" means gravity batteries can last as long as 50 years, says Asmae Berrada, an energy storage specialist at the International University of Rabat in Morocco. (Read about the big unanswered question surrounding lithium batteries.)

It's a different story with their electrochemical counterparts. "Lithium-ion cells degrade, which means their storage capacity drops irreparably over time," explains Berrada, whose research has found the lifetime cost of lithium batteries to be twice that of mechanical alternatives. "There are also constraints on how many times chemical batteries can cycle every day if you're trying to preserve longevity, which is something gravity systems don't really have to worry about as their parts can be more easily replaced."

Add into the mix concerns around human rights abuses, with cobalt mining being linked to child labour, and environmental damage, and Berrada is convinced that a non-lithium means of storing green energy is essential. Accordingly, she and her team are working on their own water-based gravity battery prototype, funded by the Spanish and Moroccan governments.

Instead of lifting a large solid weight, surplus green power will be used to move a submerged piston upwards, Berrada explains, with the return journey forcing high pressure water through a generator. Similar systems are under development in California and Germany, while researchers in Nevada are exploring a unique, railway-inspired solution.

How many of these will come to fruition, it's impossible to tell. What isn't in doubt is that the world needs bold and creative climate solutions. On this front, there are no silver bullets – but gravity batteries, with their harnessing of a truly infinite, omnipresent force, almost certainly have a role to play.