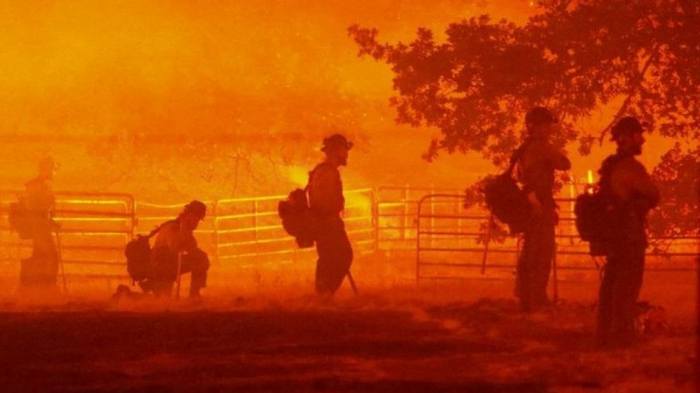 A state of emergency has been declared in part of California as a wildfire continues to rapidly spread near Yosemite National Park.

The so-called Oak Fire has exploded in size since starting on Friday, but firefighters were still unable to get any of it under control 24 hours later.

More than 3,000 people have been evacuated and 10 homes destroyed.

According to the California Department of Forestry and Fire Protection (Cal Fire), it has burnt 11,900 acres (4,815 hectares) of land, making Oak Fire the largest active wildfire in the United States right now.

The state of emergency has been declared in Mariposa County. In a statement, California's Governor Gavin Newsom said the flames were being "driven by hot, dry weather and drought conditions".

Must of the United States is sweltering through a heatwave this weekend. Temperatures in Mariposa County hit 96F (35.5C) on Saturday, and are expected to stay at that level for the next few days.

Yosemite National Park, which lies to the north-east of where Oak Fire is burning, is home to some of the largest and oldest sequoia trees in the world. The redwoods were threatened by another blaze earlier this month, but firefighters managed to save them.

Climate change increases the risk of the hot, dry weather that is likely to fuel wildfires.

The world has already warmed by about 1.1C since the industrial era began and temperatures will keep rising unless governments around the world make steep cuts to emissions.