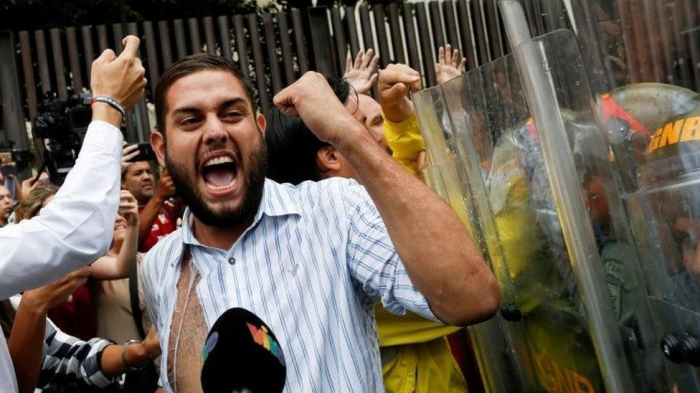 Venezuelan opposition politician Juan Requesens has been sentenced to eight years in jail, his lawyer says.

He was arrested three days after a drone carrying explosives blew up at a military parade attended by President Nicolás Maduro on 4 August 2018.

Mr Maduro was not hurt in the attack.

Juan Requesens has denied any involvement in the incident and his family say he was targeted because he is an outspoken critic of the Maduro government.

A former student leader, he became well known for organising anti-government protests in 2014.

He was elected to the National Assembly, where he made a name for himself with passionate speeches in which he said he would not give up fighting until Mr Maduro was removed from the presidency.

His lawyer, Joel García, said he had been found guilty of conspiracy, without giving more details. Venezuela's prosecutor's office has not yet commented.

The charges against Mr Requesens relate to an incident at a military parade in Caracas in 2018.

As the parade was in full swing, a small drone carrying explosives detonated in the air, not far from the stage where the president and top officers of the military were standing.

Mr Maduro's bodyguards rushed to protect the president and he and those on stage were unhurt. However, seven members of the National Guard were injured in the panic-filled moments which followed.