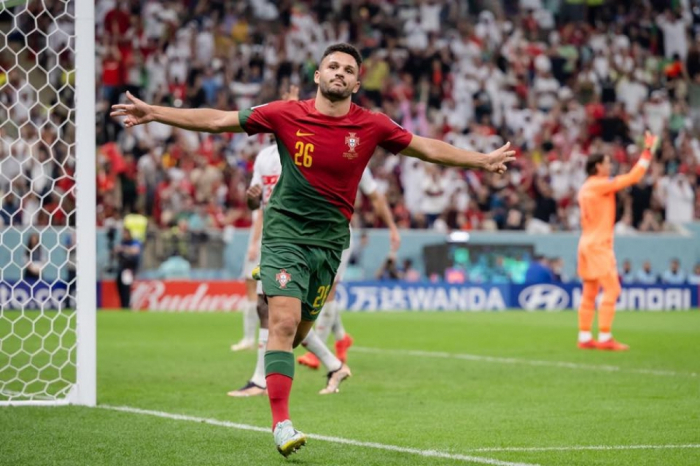 Portugal hammered Switzerland 6-1 Tuesday to reach the quarterfinals of the 2022 FIFA World Cup.

Cristiano Ronaldo for the first time since 2008 started a major tournament on the bench.

Goncalo Ramos brought the lead to Portugal with an amazing strike from a narrow angle in the 17th minute.

Swiss goalkeeper Yann Sommer was in the right place when Otavio's dangerous shot was aimed at his goal in the 22nd minute.

Xherdan Shaqiri's strike from a freekick missed the bottom right corner by inches as Portugal goalie Diogo Costa tipped it around the post at the very last moment in the 30th minute.

Veteran Portuguese defender Pepe made it 2-0 with his header to a corner kick in the 33rd minute.

Diogo Dalot deflected the ball from near Portugal’s goal line in the 38th minute.

Sommer made a critical save against Ramos in the 43rd minute and the first half ended 2-0.

Portugal didn't back down in the second half either as Ramos netted another one from the six-yard box in the 51st minute.

Portuguese wing-back Raphael Guerreiro made it 4-0 with his good strike in the 55th minute.

Manuel Akanji took one back for Switzerland with his finish from close range in the 58th minute.

Portugal's Ramos completed his hat-trick, the first at Qatar 2022, with a classy finish in the 67th minute.

Breel Embolo of Switzerland attempted a bicycle kick from long range but it went out close to the goal in the 80th minute.

Ronaldo, who got in the match in the 74th minute, netted a goal, but it was disallowed due to offside in the 84th minute.

Rafael Leao, who got in the game in the 87th minute, scored the sixth goal for Portugal with a classy shot in the 92nd minute and the match ended 6-1.

Portugal will take on Morocco in the quarterfinal round of Qatar 2022 on Saturday.