Justin McCarthy on The Armenian Genocide Lie: Armenians Are Afraid of The Truth - VIDEO 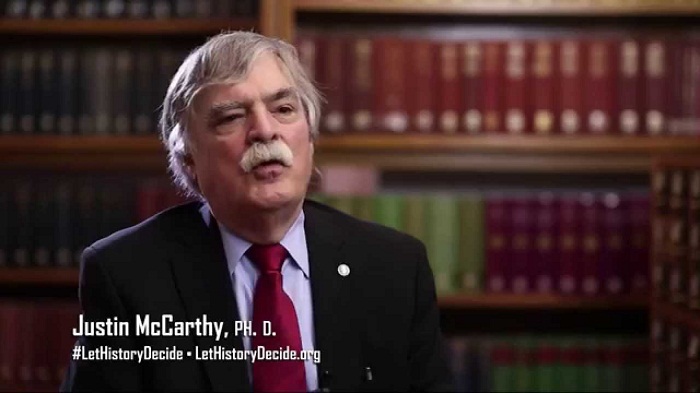 Armenian nationalists and pressure groups are cowards. They are afraid of debate, afraid of discussion. These people don`t know the facts. They give insults instead. They don`t want people to know the truth.

Dr. Justin McCarthy easily tells us about the research and easily shows that the Armenian Genocide is nothing more than a propaganda story that is rooted from the difference of religions between Armenians and Muslims.

And that these people continue to talk about these events and label them as the "Armenian Genocide" in order to pressure Turkey to give Armenians reparations which they believe Turkey will because they do not know the history of the issue.

Dr. Justin McCarthy mentions that the Ottoman statistics say that there were ~600,000 Armenians and 3 million Ottoman Muslims that died during World War I and soldiers are not considered in this statistic.

Ottoman Muslims also involve Kurds, Turks, and other Muslims in the Ottoman Empire at the time. It shows that many Muslims were massacred by enemy forces or rebel groups of the Armenians.

Dr. Justin McCarthy also mentions that the telegram fabricated by Armenian propagandists seeking to find a smoking gun for the Armenian genocide theory, is a forgery, and that it should not be taken as scholarly evidence of genocide.

In the Van Rebellion Armenian capture of the city held 6000 Ottoman soldiers from reaching the front lines to fight the invading Russian forces. This was one of the reasons that the Relocation law of the Armenians was enacted.

Food was very scarce in Eastern Anatolia especially during the war when armies of different nations passed through the area such as the Ottomans and the Russians and the Armenian Rebel armies.

This is because the Ottomans wanted to remove the threatening Armenian Rebellion away from the area, without targetting or harming Armenians who were not rebelling, the problem was, it was sometimes difficult to tell.

Dr. Justin McCarthy tells us that whenever a population is moved there will be people stealing from them, attacking them, and sometimes taking revenge perhaps because a Turkish man might take revenge on innocent Armenians because Armenian rebels massacred his/her village.