During bloody events of 1918, along Azerbaijanis about 3 thousand Jews were brutally killed 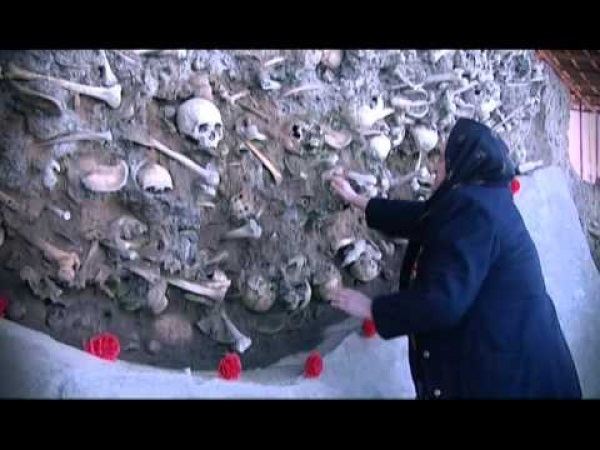 Turkic people have been suffering from the physical and moral terror, occupation and massacre policy of Armenian extreme nationalists for over 100 years.

To justify their territorial claims against neighboring countries and their policy of ethnic cleansing, the Armenian extreme nationalists refer to the so called genocide allegedly committed by Ottoman Empire in 1915. In fact, the researchers, including European scholars, who are loyal to scientific truth, have already proved that no Armenian genocide had ever occurred. The product of ill imagination, the so-called ‘Armenian genocide’ is based on forged documents. Although the Ottoman period archives were opened in Turkey and everyone, including Armenian scholars and politicians were invited to study the historical documents dated the early 20th century, the Armenian side refused the proposal, thus, showing the real ambitions of those who claim the so-called ‘Armenian genocide’.

Taking advantage of the protection of Tsarist Russia, from the late 19th century the Armenian extreme nationalists committed terror acts and massacres in the territories of present-day Turkish Republic and South Caucasus, by brutally murdering thousands of innocent Turks and Azerbaijanis, devastating many settlements, ruining ancient cultural monuments, cemeteries, trying to annihilate all signs of Turkic existence in the region.

Many innocent civilians were subjected to brutalities in Erivan and Zengezur (modern-day Armenian Republic), Tiflis, Baku, Nakhchivan, Ganja, Shamakhi, Guba, Lenkeran, Karabakh, Mughan in 1905-1907, later in 1918-1920, in Eastern Anatolia, including Erzurum, Kars, Erdehan, Adana during the First World War. In March 1918, over 30,000 Azerbaijanis fell victims of genocide only in Baku.

It is worth noting that along the Azerbaijanis almost 3,000 Jews were brutally killed by Armenian gangs in Ganja, Oguz, Guba and other regions of Azerbaijan during the bloody events of 1918.

The impunity of the criminal acts of Armenian chauvinist and missing relevant political-juridical evaluation led to hostile policy towards our country during the Soviet time. With support of the Soviet leadership, the authorities of the Armenian SSR achieved the deportation of almost half a million Azerbaijanis from Armenia in 1948-1953, later in 1988-1989. During the violent actions hundreds of Azerbaijanis were killed because of their national identity.

As a result of Armenia`s occupational war and ethnic cleansing policy launched in 1988 and aimed at annexing Nagorno-Karabakh, which is an integral part of Azerbaijan,

The Armenian nationalists committed atrocious crimes against the Azerbaijani population during the war of aggression. During the occupation of 15 Azerbaijani-inhabited villages of Nagorno-Karabakh, part of their residents of was killed based on an aforethought plan and with a special cruelty.

On the night from 25th to 26th of February 1992, the armed troops of the Armenian Republic and the Armenian terrorist groups in Nagorno-Karabakh, supported by the 366th Motor Rifle Regiment of the former Soviet Union, which mainly consisted if Armenians, attacked the city of Khojaly populated by Azerbaijanis and committed a genocide, one of the most brutal acts in world history. The city of Khojaly was completely burnt and destroyed, the civilian population was subjected to an unprecedented ethnic violence; 613 Azerbaijanis, including 63 children and 106 women were savagely killed, 487 people became disabled, 1,275 civilians – seniors, children, women were taken prisoner and became subject to unthinkable humiliation, cruelty and offence.

Those, who tried to escape from the siege, were later trapped and mercilessly killed by the Armenians in the forests. The Armenian soldiers peeled the skins off their victims, cut off the limbs, tore out the eyes of babies, notched out the abdomens of pregnant women with bayonets, buried or burned people alive.

The character and scale of the bloody crimes committed in the city of Khojaly and other settlements of Azerbaijani people completely fit to the definition of the Convention of “Prevention and Punishment of the Crime of Genocide” adopted with the Resolution 260 (III) dated the 9th of December, 1948 by the UN General Assembly. The planned and deliberated violent acts of massive murders were aimed at murdering the local people based on their ethnicity. The inhabitants of the other occupied villages and cities saved their lives only by escaping prior to occupation.

To pay tribute to all victims of the Armenian atrocities against Azerbaijanis, the 31st of March is marked as the Day of Genocide of Azerbaijani people. The National Assembly of the Republic of Azerbaijan adopted a number of relevant statements and documents, asked foreign government and parliaments to recognize genocidal crimes committed by the Armenian nationalists against Azerbaijanis in the 19-20th centuries, to complete setting effective international legal mechanisms to prevent the impunity of such crimes in the future, to help to solve the Armenian-Azerbaijani conflict over Nagorno-Karabakh conflict in a peaceful way for to avoid new genocides against the Azerbaijanis in the future…

From the statement adopted on 13th of October in 2006, by the National Assembly of the Republic of Azerbaijan.