Cuba blames US for migrant crisis at Costa Rica border 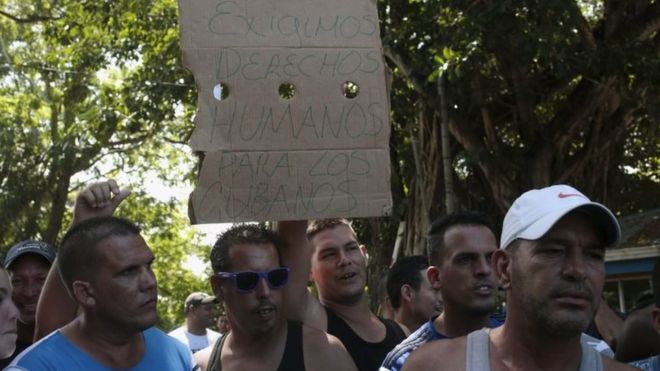 Cuba has blamed US policy for a surge in migration from the Communist-run island to the United States. The Cuban foreign ministry said US laws dating back to the Cold War encouraged illegal emigration.
The statement was published as almost 2,000 Cuban migrants remained stranded on the border between Costa Rica and Nicaragua.
The Cuban migrants say they want to reach the US, but Nicaragua has so far denied them passage north.

The Act was revised in 1995 under the Clinton administration.

From then on, Cubans who made it onto US soil were allowed to apply for residency but those intercepted at sea were turned back.
The policy has become known as "wet foot, dry foot".

In its statement, the Cuban foreign ministry said that the policy "stimulates irregular emigration to the US and constitutes a violation of the letter and the spirit of current migration agreements".

It said that the policy was "at odds with the current bilateral context and hindered the normalisation of migratory ties between Cuba and the US and created problems for other countries".

There has been a significant rise in Cubans leaving the island since the government announced a thaw in relations with the US in December. Many Cubans set on emigrating fear that with US-Cuban ties becoming ever closer, the Cuban Adjustment Act could be abolished.

Almost 2,000 Cubans who decided to emigrate are currently stuck on the Costa Rica-Nicaragua border. Under the 1966 Cuban Adjustment Act, Cuban nationals can become residents in the US much more easily than applicants from other countries.

Nicaragua, a close ally of Cuba, closed its border to the migrants on Sunday, accusing Costa Rica of dumping the migrants on its doorstep. Many of the migrants flew from Cuba to Ecuador, which does not require Cubans to have visas.

From there, they travelled north through Colombia, Panama and Costa Rica until they were stopped by Nicaragua. Nicaragua said it turned back hundreds of Cuban migrants on Sunday who had crossed the Penas Blancas border post by force.

The move has caused tension between neighbours Costa Rica and Nicaragua, with Costa Rica demanding a "humanitarian corridor" be created to allow the migrants to continue their journey.

The Cuban foreign ministry said that those who had left the island legally were welcome to return to Cuba if they so wished.

But one of the migrants stuck at the border told the Associated Press news agency that he had no desire to return. We`re a group of human beings trying to achieve their dream - to go to the United States," he said.