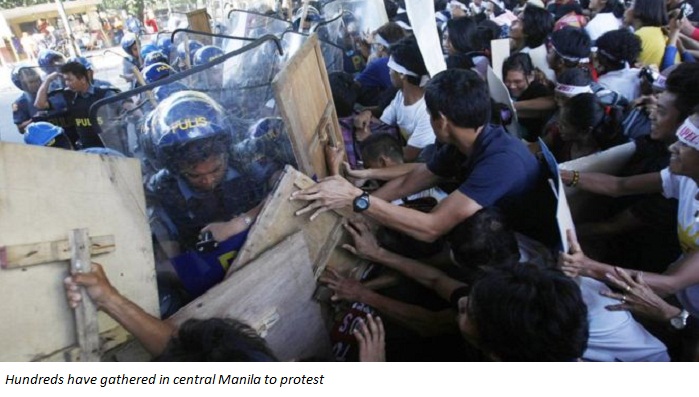 Large protests are taking place on the streets on the Philippine capital, Manila, where leaders are attending the Apec regional trade summit.
Hundreds of people from indigenous, student and labour groups clashed with police, who deployed water cannon.

The summit has been overshadowed by territorial disputes over China`s activities in the South China Sea.

A draft copy of a declaration due to be released later today says leaders at the Asia Pacific Economic Cooperation (Apec) summit "strongly condemn" all acts of terror and stress the "urgent need for increased international co-operation and solidarity in the fight against terrorism". 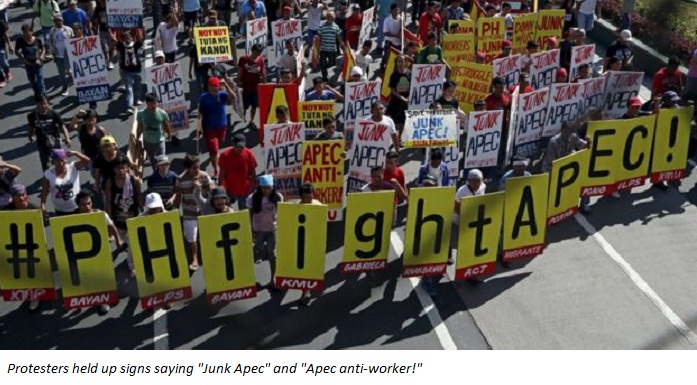 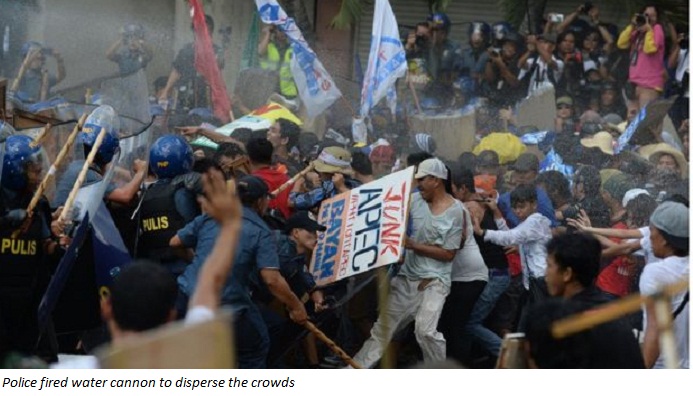 
Protesters gathered on Thursday morning in the Manila Bay area, where the Apec meetings have been held.

The anti-globalisation protesters were calling for Apec to be dismantled, accusing the trade bloc of taking advantage of poorer countries.

A protest leader, Renato Reyes, told the Associated Press news agency: "Apec and imperialist globalisation have only benefited the rich countries while further impoverishing developing countries like the Philippines."

Tens of thousands of soldiers and policemen are already in place in the sprawling city to guard against disruptions and potential terrorist attacks.

Demonstrators carrying big placards under the hot sun are chanting anti-Apec, anti-US slogans such as "down with Apec, down with America".

Hundreds of police with batons, truncheons and shields are blocking the protesters from getting near the venue.

Trucks with water cannons are poised to disperse the crowds. Police are currently holding their ground against protesters.

They are also playing loud dance music to drown out the unified voices of the protesters.

World leaders at the summit have been discussing issues such as climate change and regional economic co-operation.

But the dispute among several Asian countries who have overlapping claims in the resource-rich South China Sea has also been in focus.

US President Barack Obama earlier called for China to stop its land reclamation work on disputed reefs. He also signed defence agreements with the Philippines, one of several countries which is in dispute with China on the issue.

Mr Obama said there was a need for "bold steps to lower tensions" in the region.

Chinese President Xi Jinping is also attending the conference but has yet to comment on the issue. China says its work is legal and it has no plans to militarise the new artificial islands. 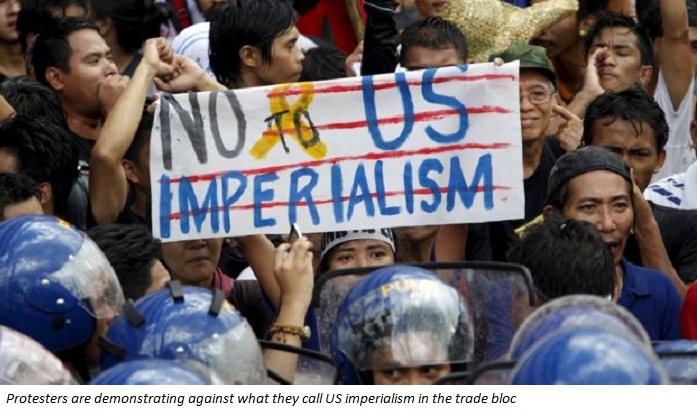