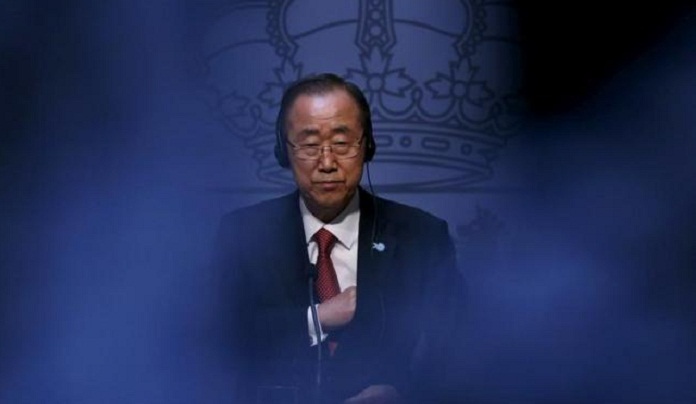 United Nations Secretary-General Ban Ki-moon on Friday announced plans for a summit in March on resettling millions of people who have fled Syria as he expressed concern at "misplaced suspicions about migrants and refugees."
Some 4.2 million Syrians have escaped the country`s nearly five-year civil war to neighboring Lebanon, Turkey, Jordan and Iraq, according to the U.N. Refugee Agency. Hundreds of thousands of those Syrians have streamed into Europe this year.

After deadly attacks in Paris a week ago by Islamic State, some politicians in Europe and North America have warned that countries face big risks by admitting refugees without rigorously determining if any could be dangerous extremists.

A Syrian government crackdown on a pro-democracy movement in early 2011 sparked the civil war and Islamic State militants used the chaos to seize territory in Syria and Iraq. The U.N. says some 250,000 people have been killed during the conflict.

Ban told the 193-member U.N. General Assembly on Friday that he was deeply concerned about "misplaced suspicions about migrants and refugees, especially those who are Muslim."

"We must be on guard against such distortions and discrimination, which only play into the hands of terrorists trying to sow divisions and fear," Ban said. "We must respond not by closing doors but by opening our hearts with unity, tolerance, and pluralism and compassion."

He said the U.N. High Commissioner for Refugees would convene a conference in March to win pledges from countries to resettle or help place those who have been displaced due to the Syria conflict.

The U.S. House of Representatives, defying a veto threat by President Barack Obama, overwhelmingly passed Republican-backed legislation on Thursday to suspend Obama`s program to admit 10,000 Syrian refugees in the next year.

Some Republicans have said some refugees could be militants bent on attacking the United States, noting reports that at least one Paris attacker may have slipped into Europe among migrants registered in Greece.

"Millions of refugees who have lost everything to violence and oppression want to end those threats more than anyone. They can potentially be a major constituency in combating violent extremism," Ban said.

He said he would also hold a high-level summit on managing large-scale movements of migrants and refugees one day before the annual gathering of world leaders at the United Nations in New York in September.