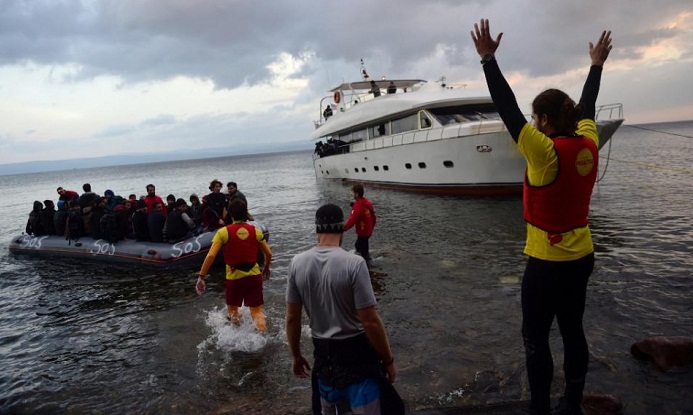 As the hunt for jihadists widens after last week`s Paris attacks, authorities in Greece warn it was virtually impossible to pick out dangerous extremists among arriving migrants, without prior intelligence.
"If they are not already registered in the database, it`s nearly impossible," says Dimitris Amountzias, police captain in charge of Moria, Greece`s main registration camp on the island of Lesbos.

At the camp, dozens of migrants and refugees queue to give their fingerprints, have a photo taken and be quizzed by agents from European border agency Frontex.

It`s a seemingly detailed security check, but jihadists have already proven they can bypass it with ease.

The suspected architect of the Paris attacks that killed 130 people, 28-year-old Abdelhamid Abaaoud, escaped from Europe to Syria and returned without being detected.

French Interior Minister Bernard Cazeneuve this week suggested Abaaoud, who was killed in a police raid in Paris on Wednesday, had passed through Greece.

Athens denied this on Friday. "Until today, no source has provided any evidence to confirm this claim," the Greek citizen`s protection ministry said in a statement.

Greek police were looking for Abaaoud in Athens in January, after a Belgian police raid in the eastern town of Verviers broke up a cell planning attacks.

At the time, a cellphone was found to have made calls to the Verviers group from Greece.

Greece extradited to Belgium a 33-year-old Algerian man arrested in a raid in the Athens district of Pangrati, but Abaaoud was never found.

`We don`t really know`
Still, it was thanks to Greece`s fingerprints database -- and a passport found near the scene of the attack -- that French and Greek authorities were able to determine that one of the men who blew himself up outside the Stade de France on November 13 had registered himself as Syrian refugee Ahmad al-Mohammad on the island of Leros on October 3.

The Greek police did not immediately react to the announcement.

Amountzias insists his officers are doing their best under the current guidelines.

"There isn`t a single officer here who would let a migrant through without first taking their fingerprints," he insists.

"External borders are checked... the refugees are checked and identified under European rules," Toskas said.

One fail-safe is that migrants cannot buy ferry tickets off the island without undergoing police registration, Amountzias said.

But those looking to give the police the slip can also obtain fake Greek documents, with criminal syndicates doing a brisk business in supplying migrants with fake papers and police registration documents.

A gang of suspected forgers, most of them Pakistanis, were arrested on Lesbos on Wednesday.

"We don`t really know who is coming through," admits another police officer, speaking on condition of anonymity.

Even if Syrians generally carry passports it`s not always possible to match the document to its bearer, and people of other nationalities "are registered on the basis of who they claim to be," the officer adds.

Syrians with falsified Greek passports have even ended up in South America.

Five Syrian men were caught in Honduras this week, while a woman was arrested in Costa Rica with a suspicious Greek passport.

France has asked the European Union to ensure better information-sharing among intelligence agencies.

"Contrary to what is thought, it is quite easy to enter and exit the European Union without being caught," says French criminologist Christophe Naudin.

On the island of Kos this week, two Syrians were held for two days after photos of Islamic State flags were found on their cellphones.

On Lesbos, another man was taken aside for wearing a T-shirt that read: "Don`t panic, I`m Muslim".

More than 650,000 migrants and refugees have reached the Greek islands so far in 2015 using the eastern Mediterranean route from Turkey, the International Organisation for Migration (IOM) said earlier this month.

Of those, over 500 have died, including many children.