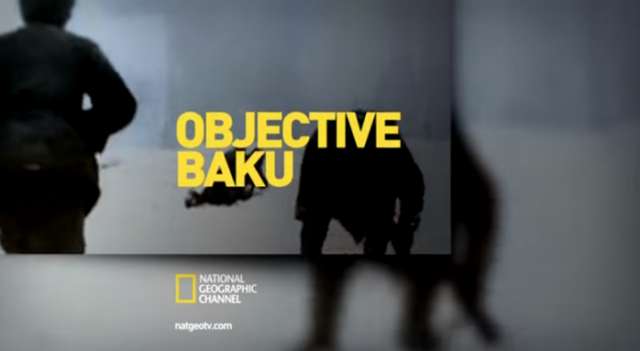 Objective Baku - How Hitler Lost the Battle for Oil. National Geographic Documentary Commemorating to the Victory over Nazism during World War Two and pays tribute to Azerbaijan and Azerbaijani people contributed to The Great Victory.

The role of the Azerbaijani oil in the Victory shall not be overseen. E.g. 72 per cent of the Soviet crude was produced in Baku. This implies that 7 out of 10 tanks or war planes were fuelled by Baku’s ‘black gold’.

Objective Baku took 14 months of substantial reseach in Azerbaijan, Germany, the US, the UK, France and Russia, with over 200 hours of videomaterials, photographs and other documents scrutinized.

The film provides a totally new approach to the history of World War II, i.e. through the prism of oil. The documentary also features some unique video snapshots of the WW2 battles never shown to this day in a totally new format of restored color film.

The Azerbaijan Soviet Socialist Republic entered World War II with the whole Soviet Union, on June 22, 1941. German command gave the great consideration to oil pools of Baku and set a task to take Baku and oil and gas area of Baku under their control in the course of the Battle of the Caucasus.

Baku and the North Caucasus were the main oil sources for the whole economy of the USSR. Reserves of strategic raw materials such as deposit of tungsten-molybdenum ore were in these places. Loss of the Caucasus could cause a significant influence upon general course of the war against the USSR, and that is why Hitler had chosen namely this direction as the main Group of armies, created for attack to the Caucasus, was given coded identification “A”.

Tasks of the group “A” were the following: to surround and destroy the Southern Front in the southern and south-western parts of Rostov-on-Don, which drew off over the Don River, and to capture the North Caucasus; then it was intended to pass round Greater Caucasus with a group from the South, capturing Novorossiysk and Tuapse and with the other group from the East, capturing oil regions of Grozny and Baku. Simultaneously, it was intended to overcome the Dividing Ridge in its central part over its passes and entrance to Georgia, with a bypass manoeuvre.

German army approached the South Caucasus. Even the date of seizure of Baku – September 26, 1942 - was fixed. Defense regions were created around Nalchik, Vladikavkaz, Grozny, Makhachkala and Baku. The first stage of the battle of the Caucasus was from July to December, 1942. German-Romanian army, suffering a great loss, could reach foothills of Greater Caucasus and the Terek River. But, generally, “edelweiss” plan of Germany failed. Only during the 1st stage of the battle the “A” group of armies lost about 100,000 people and Germans couldn’t burst the South Caucasus and the Near East.

From August 25 to September 17, 1941 the Great Britain and the Soviet Union carried out a joint campaign under a code name “Consent”. Defense of Iranian oil deposits and pools and their capture by German army and their allies, and also defense of transportation corridor (southern corridor), along which allies supplied the Soviet Union according to Lend-Lease, was its main goal. During World War II, Rezā Shāh refused to deploy troops of the Great Britain and the Soviet Union at their request. But, for instance, according to the 5th and 6th points of the agreement between Soviet Russia and Iran of 1921, the USSR had a right to deploy its troops in the territory of Iran in case of appearance of any threat to its southern borders.

Armed forces of the allies invaded Iran, dethroned Reza Pahlavi and established their control over railway roads and oil deposits of the country, in course of the campaign. Meanwhile, troops of the United Kingdom occupied southern Iran, and troops of the Soviet Union – northern part of the country