The region of Aghdam is the administrative region of the Republic of Azerbaijan. It is located on the northern-eastern slopes of the Karabakh Chain of Mountains, in the south-western part of the Kura-Araxes Lowland.

The region`s landscape is predominantly plain and partially mountainous. During the pre-occupation period, the region of Aghdam has developed such agricultural areas as cereals cultivation, viticulture, cotton growing, livestock sector and sericulture.

The following educational and social institutions rah its activities before the occupation.- 148 secondary schools; 24 clubs; the Drama Theater; the Mugham school; the Museum of Bread; the art gallery; the Museum of Local History and Geography; the house museum of Gurban Pirimov; 69 healthcare institutions.

The Aghdam Bread Museum opened in 1983, was the second bread museum in the world and the first and one of a kind in the former USSR. Fossilized ancient grains, rare sorts of cereals, numerous valuable books on grain farming, manuscripts, also labor tools - wooden plough, threshing board, toothed sickle, reaping hook, hand-mill and thresher were among the exhibits collected in the museum.

The museum itself has an interesting history. Thus, there was an old ruined mill at the city center. As the mill was the sole source of bread during the hard years of war, it was revered as a holy place, and the damage of the mill was unacceptable. Later, it was welcomed the idea of establishing Aghdam Bread Museum where the mill was situated.

Famous selectionist scientist, academician Imam Mustafayev enriched the museum pieces by his personal grain collection. Bread samples of about one hundred peoples were obtained. A Russian woman who had been a survivor of the Leningrad Blockade gave to the museum her carbonized piece of bread weighed one hundred and fifty grams which she kept and did not eat even on the verge of death. Bread samples from the cosmonaut camp were also sent to the museum. About two thousand grain samples were soon collected in the museum.

“Grad” missile launched by Armenians on August 12, 1992, put an end to existence of the Aghdam Bread Museum. The foreign journalists took photos of the museum ruins and posted on the various websites. 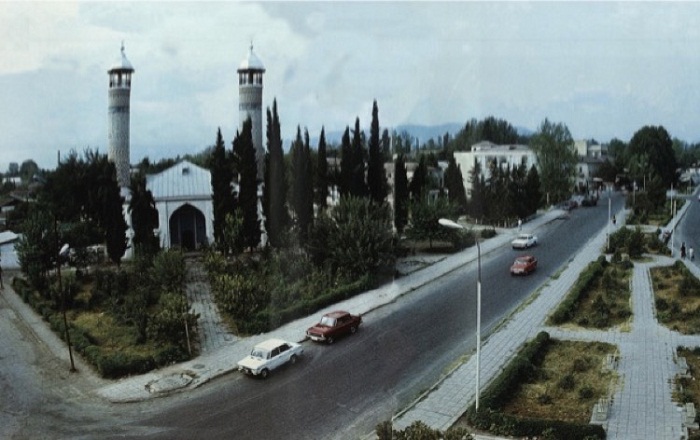 The mosque was built by the architect Karbalayi Safikhan Garabaghi in the years 1868-1870. The core of the prayer hall project comprises traditional square shape bearing four pillars in the middle. Three rows of deep niches carved in the east and west sides of the square widened the space of the hall and gave it a rectangular shape. There is a high sanctuary niche in the middle of the south wall of the prayer hall. Elegant sanctuary niche bears an inscription of the name of the master of architectural décor (late Karbalayi Naggash Tabrizi’s son – master Mahammad Naggash Tabrizi) and repair date (1331 Hegira calendar, 1913 AD).

Proceeding with the tradition of Juma Mosques with two minarets widespread in medieval Azerbaijani architecture, the architect Karbalayi Safikhan Garabaghi created the original type of mosque - Aghdam Juma Mosque in accordance with the call of his times, also architecture and construction experience of Karabakh.

In July, 1993, like other buildings, Juma Mosque was also demolished during the occupation of Aghdam.

Panahali Khan’s tomb referred to the 18th-19th centuries is situated in Imaret cemetery in Aghdam region. There is another tomb looked alike in close vicinity which belongs to the Khan of Karabagh - Ibrahimkhalil Khan, Panahali Khan’s son. Panahali Khan’s tomb has one front door in arched structure. The tomb has a polygonal cone-shaped projection. The grave of the deceased is inside the tomb. Khurshudbanu Natavan’s monument was built in front of the tomb.

The palace known under this name used to be near Aghdam City and has only survived as ruins; it consists of two structures. The complex is supposed to have more buildings initially. It was built in the early years after Panahali Khan left the service for Nadir Shah in Khorasan in 1738 and started creating the Karabakh Khanate. The perpendicular buildings of the palace were not like a Khan’s luxurious headquarter, but resembled the houses of the 18th century’s Karabakh rich. Their façades used to face the yards.

Relatively large, the main building of the palace had a rather complicated configuration and consisted of different-size rooms. The veranda hall occupies the central position in this one-floor building.

Two-room open-entry premises join the veranda hall. The rooms are covered with beams.

Longer than 16 meters, the front façade of this interesting house of the 18th century faced the South by the traditions of Azerbaijan’s house architecture.

The second building of the palace is rectangular and consists of 2 rooms. The front door and windows facing the yard - the eastern direction, those rooms are covered with beams, which is typical for stone construction.

Shahbulag palace complex mainly consisted of the residential houses, bazaar, bathhouse and mosque. The palace which was one of the summer residences of Karabakh khans, was built in the years 1751-1752. The Khan’s palace headquarter was in the close vicinity.

The joint constitution castle is rectangular, and its external walls are reinforced with circular and semi-cylinder towers. The walls are 7-meter high, and the height of the towers is 8.5 meters. The mosque located in the vicinity of the castle consists of a small stone prayer hall and veranda. Shahbulag buildings are supposed to have influenced the Karabakh Khanate’s and especially the capital Shusha City’s architecture.

After the occupation of the Shahbulag palace complex by Armenians in 1993, the mosque inside the complex, bathhouse, Khan’s palace and several residential houses were demolished. Only the castle walls survived.

In 2006, as a result of the archaeological excavations carried out by the expedition of the Archaeology and Ethnography Institute of Armenia, the Armenian scientists claim that the mythic Tigranakert city, allegedly “one of the capitals of the ancient Armenian state” was situated in the very place of Shahbulag palace. Until that time, the Armenian scientists unambiguously stated that the remains of Tigranakert city were located in Turkey, in the vicinity of Diyarbakir city.

So, this implies that “the ancient capital” of Armenians have secretly reached to Shahbulag palace by sliding.

The opening ceremony of the “Tea House” in Aghdam was held on July 26, 1986. Author of the project was Naig Samadov, the chief architect of Aghdam in the years 1984-1988. The tea house was completely destroyed during the occupation of Aghdam.

A valuable example of the Elkhanids’ memorial architecture has survived in Khachin Turbatli village of the Aghdam Region. A construction inscription above the front door of this site, popularly called “Sari Musa Tomb”, says “Master Shahbenzeri has built this tomb for the deceased Gutlu Khaja Musa Oglu, who needs Allah’s mercy”. By this inscription, the the construction of the tomb was completed on July 15, 1314. Most probably, the tomb of the person, who was an influential figure of Azerbaijan’s historical Khachin district, has determined the village’s name.

Gutlu Khaja Musa Oglu tomb has dynamic volume composition, which is typical for the tower-shaped tombs of Azerbaijan. However, the monument embraces the original features of Aran, especially Garabakh architecture in both the construction technique and artistic design of the details. The tomb has a double constitution of the under vault and overground chamber.