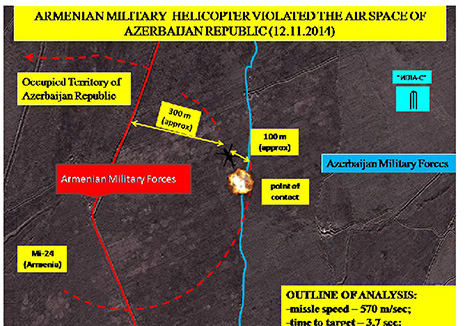 The flights of two Mi-24 combat helicopters of Armenia’s armed forces on Nov. 12 and an analysis of completed tasks once again confirm the initial findings, the Azerbaijani Defense Ministry said Nov. 18.

An animated event model, prepared with reference to the opinions of experts in military aircraft and operational intelligence data, clearly shows that the helicopters’ crews, following combat instructions, were executing a task to strike the Azerbaijani army positions on the front line.

“After completion of this task, that is, after shelling our positions, the enemy helicopters, manoeuvring and covering each other, began to leave the zone of fire,” the ministry said.

The helicopter was shot down by the Azerbaijani side.

As a result of the ensuing war, in 1992 Armenian armed forces occupied 20 percent of Azerbaijan, including the Nagorno-Karabakh region and seven surrounding districts. The two countries signed a ceasefire agreement in 1994.

The co-chairs of the OSCE Minsk Group, Russia, France and the US are currently holding peace negotiations.