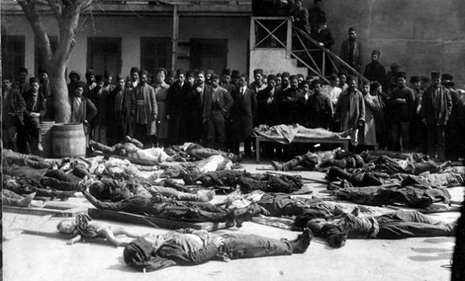 (At the end of the XIX century - the beginning of the XX )
After 30-es of the XIX century massive resettlement of Armenians in the northern Azerbaijani lands, including its historical territory of Karabakh was continued. Historical studies indicate that more than 1 million of Armenians out of 1.3 million in Transcaucasia resettled here later. However, in 1916, in Karabakh (within the borders of the Khanate) 51% of the population was Azerbaijanis, 46% of the Armenian (together with the local Albanian origin Armenians). The settlement of moved Armenians in the mountainous part of Karabakh became more extensive. This policy aimed to providing compact living of Armenians in one place and had a strategic purpose.

Thus, the tsar Russia had created favorable conditions for Armenians to mass resettlements in Azerbaijan, including Karabakh, and for their administrative and political, socio-economic and cultural development. Some time later the Armenians began to struggle for the realization of the idea of "Great Armenia" in the territory of Azerbaijan. One of the components of this idea was to destroy local population - Azerbaijanis in Karabakh, Yerevan, Nakhchivan and other Azerbaijan territories and to capture their lands. After failure of treacherous rebels of Armenians in the Ottoman state in the years of 1890 the center of this struggle moved to Northern Azerbaijan.

Since 1905, the Armenians committed mass genocide against the Azerbaijani people. The policy of genocide against Azerbaijanis committed by Armenians in Karabakh became more tragic. However, the massacres committed by Armenians in 1905-1906 did not satisfy and calm them. They using the historical situation caused by the First World War attempted to establish the mythical "Great Armenia". After rebellions against the Ottoman state in 1915 failed, the Armenians focused their main forces in the Southern Caucasus and continued the genocide against the Azerbaijanis under the Tsarism`s support. Firstly, the overthrow of the government of the tsar (February 1917) and then capture of power in Russia by the Bolsheviks (October1917) in the conditions of anarchy in the Caucasus Dashnak-Bolshevik groups united with Armenian armed forces having a long history of service in Russian army began more terrible period of the genocide against the Azerbaijanis. A new mass genocide began in March 1918 in Baku and spread in all Azerbaijan had a very hard blow to the people. With the establishment of the People`s Republic of Azerbaijan a new era began in the history of Azerbaijan. Democratic Republic of Azerbaijan took some measures to prevent the plans of armed Armenian bands and Dashnak-Bolshevik regime for total annihilation of the people of Azerbaijan in the North Azerbaijan. However, the Armenians have always been insistent to carry out the genocide. Tragedies at the end of the XX century proved it once again.