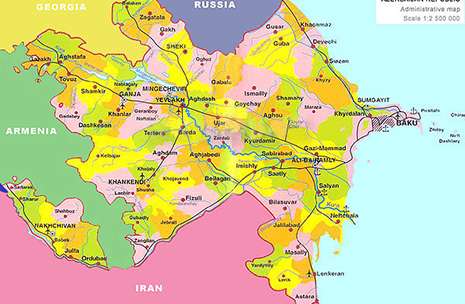 Armenians, who migrated from Balkans to Minor Asia more than two thousand years ago, settled in different historical periods on Oghuz land – the present Armenia territory and did their best to assume possession of the material-cultural monuments of ancient Turkis, Albanians, Georgians and other local residents. Armenian churchmen tried to adapt “Khays historyff for the Gospel, history of ancient states which governed the territories, and existing toponyms. In researches having been conducted as early as through XVHI-XIXcenturies some European historians, including La Kroz, A.Gutshmid, A.Carrier, wrote about consisting the manuscript repre­sented as ” History” work after Moisey Khorenatsi from cover to cover of anachronisms, its compiling not in V century, but later through copying cer­tain fragments from different books. The aim of writing all this is to reveal the fact of being ancient Armenian history fully counterfeited, the present Armenia territory’s never being Armenians’ historico-ethnical homeland, their settling in these territories with vestige of false history later on written by Armenians.

Prior to the latters settling on the present Armenia territory the local toponyms fully consisted of Turkic names in view of populat­ing the territories by ancient Turkis. The fact is betokened by tax note-books having been compiled since XVI century on these territo­ries, and by returns of censuses conducted in Russia in the early XIX century after South Caucasus occupation.

In different historical periods Armenians representing themselves as nation of either Lappish, or Aryan origin, with view to estab­lish their own State, after long bustles about Europe at last found patronage in the person of Russian tsar Peter I. Establishing of Armenian State along the frontiers between Iran and Turkey was of military-strategical importance for Russia. Immediately after

Russian-Iranian and Russian-Turkish wars (correspondingly 1826-1828 and 1828-1829) Armenians were resettled by masses to Armenian province established on Iravan and Nakhchyvan khanates territory. In the first turn they were settled in Turkic villages hav­ing been evacuated through war. According to the data given by Russian historian and statis­tician I. Shopen in “Historical monument reflecting the period of Armenian province’s annexation to Russian Empire” (Saint-Petersburg, 1852) work, due to 1829-1832 censuses returns in Armenian province there were 1111 settlements among which just in 62 villages (only 14 of them are of Armenian ori­gin) resided the local Armenians. In result of the forenamed wars 359 villages on the province territory were ruined, afterwards

most of them were settled by the migrant Armenians. The first name-changing opera­tion on the present Armenia territory was con­ducted in the first half of XIX century. Thus, Iravan was changed for Erivan (1828), Kavar-for Novo-Bayazet (1837), Gumru – for Alexandropole (1840).

After genocide acts 1905-1906 and 1918-1920 against Turkis in Erivan province Turkic villages were factically raized to the ground, most of their dwellers became refugees. Only after concluding Moscow and Kars Treaties 1921, small number of the local Turkis suc­ceeded in returning to their populated areas. And most of the villages were seized by Armenian migrants from Turkey.

The maps and statistical data, having been published under Tsarist Russia, retained Turkic names of the settlements as they were. The first official name-changing operation in Armenia was launched in 1919 under Dashnaks. In December of the year Commission, set up by the decision of Armenian Ministries Council, was charged to “restore historical names” of towns, villages, mountains, rivers. The first official name-changing operation in Soviet Armenia had been conducted from 1935 by the decrees of Supreme Council. Afterwards the names were changed in 1938, 1939, 1940, 1946, 1947, 1948, 1949, 1950, 1957, 1962, 1967, 1968, 1969, 1977, 1978, 1980. Until August 1988 there had been changed names of 521 Turkic populated areas on the present Armenia terri­tory. Due to Armenia Republic Supreme Council’s decree dated April 9, 1991 names of still 90 Turkic settlements were changed. Totally, up to now names of 668 Azerbaijani populated areas in Armenia were’changed and Armenianized to imply moral genocide against Azerbaijani toponyms.

The below list presented to the reader was compiled on the basis of “Armenian SSR administrative-territorial division” book’s publications of 1971 and 1988, as well as documents of Armenian supreme legislative bodies.

Name-change operation in Armenia was mainly conducted as below:

5. Before the names in the above-men­tioned “Armenian SSR administrative-territo­rial division” publications “yukhary”, “ashaghy”, “boyuk”, “kichik” words were given in the Armenian language, i.e. corre­spondingly “verin”, “nerkin”, “mets”, “pokr”. Thus there was suggested idea that the changed names are as if Armenian toponyms.

6. Up to 1935 names of Turkic populated areas in Armenia had been changed without decision of supreme legislative body. For example, Babirli – Bartsrashen (Ani dist), Daymadaghly – Shrvenants (Gafan d.), Tovuzgala – Berd (Shamshaddin d.), Shirabad – Parakar (Echmiadzin d.). We should also point out that along with changing names of settlements in Armenia, under the pretext of villages amalgamating names of hundred

In the above-mentioned publications names of Turkic settlements were purposely so much distorted that it became impossible to identify Turkic origin of the toponyms. In the below list we tried to restore the distorted names.